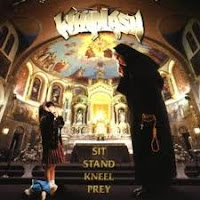 New Jersey's Whiplash returning in the mid to late 90s to finish what they started was at first a welcome notion, until I laid my ears on their near complete abortion Cult of One, on which Tony Portaro and his band decided to forage into the new terrains of groove metal and truly dull their blades. There was no "Walk the Plank" to be had anywhere. No "Hiroshima". No "Spit On Your Grave". No, it was essentially run of the mill modern 90s thrash with influence from hot bands of the day like Pantera and Black Label Society. A year later, the band's second offering through Massacre, Sit Stand Kneel Pray, would see even further changes from the Whiplash of the past, but ultimately, the music here is at least more effective, if nothing to write home about.

What you have hear is the departure of vocalist Rob Gonzo and drummer Tony Scaglione, and another somewhat new direction, a mix of straight up heavy, speed and thrash metal which is thankfully brimming with good riffs, even though it retains a few of the groove and shuffle elements of its direct predecessor. Guitarist Warren Conditi stepped in here for vocal duties, and while his style is not entirely different than Gonzo, he's much better at it, with a decent melodic tone that would honestly fit right in to some progressive or power metal band. There are some moments like "Left Unsaid" where the vocals very much remind me of a mix of Alice in Chains' late Layne Stayley (due to the melodic layering) and Zakk Wylde, but it's never so bad that you want to throw the album at the nearest concrete surface and watch its plastic and steel bits skitter off into the urban waste. No, Sit Stand Kneel Pray is not a good album, but it's got some tasteful enough tracks that it doesn't belong in the cult of none like its boring step-sister.

Though it never really feels like we're listening to the Whiplash of days gone by, "Climb Out of Hell" has a nice, speedy lick to it that reminds me of something like Wolfsbane or the Rhoads era of Ozzy Osbourne. The tones and texture to the licks creates a positive momentum, and Conditi has a far better range than the man he's replacing, even if he's no replacement for Tony Portaro or Glenn Hansen, who remain the band's best singers. "Left Unsaid" is only suitable to those seeking out a mix of Ozzy and Alice in Chains, and the groovy plummet of "Hitlist" grows less interesting with every subsequent riff past the intro, but then you've got "Cyanide Grenade" which is groovy thrash that wouldn't be out of place on Pantera's Cowboys from Hell, or "Lack of Contrition" which has most of the best riffs and vocals on the album in one place. Other fare, like the dreadful "Knock Me Down" or blues grooves of "Word to the Wise", is best not discussed, because it's just as bad if not worse than anything on Cult of One.

Perhaps the muscles here were not so rusty as on the album before it, and that's why, despite its flaws, Sit Stand Kneel Pray doesn't leek quite the same terrible taste on the buds. However, it still leaves so much to be desired, and when you run it up against Insult to Injury or Ticket to Mayhem you can quickly conceive exactly why the band never needed to journey this path. The production here was the best yet of the band's career, and the guitars deliver about 50% of the time, but it only made me pine for the thrashing excess and manic testosterone of their 80s output. Apparently, I'm not the only one, because the album to follow this was almost a complete reversion to the speed/thrash metal that put the band on the underground map to begin with. If it weren't for the mediocre Unborn Again that the band have recently released, I'd tell you that Sit Stand Kneel Pray had gotten all of this rock and roll out of the band's system, but that's a well they seem to still drink from time to time.