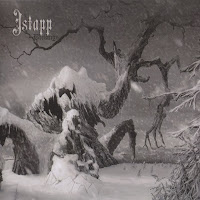 Istapp ('icicle') seems exactly the sort of project that those who favor the more accessible flavors in black metal, without entirely abandoning or alienating its more aggressive components, would die for. It's a wonder that they've not stirred up more of a reception for their debut, despite its fairly high profile release through Metal Blade Records. Sharp, melodic and with crisply plucked guitars, they bear the semblance of some cross pollination of Dissection, Vintersorg and Immortal, with the addition of clean, low vocals that soar off against the wintry landscapes the band are so desperately intent on crafting. Blekinge is named for the band's traditional province in Sweden, and judging by the influence its had on these barbarians, who dress as if being filmed in a Mad Max sequel set on some glacier, it must be a cold, dead and beautiful place...

The band honors many of the environmental cornerstones of the black genre, with a mix of blasted and rock beats, streams of gleaming melodic chords that whip about the production like whorls of silvery snow-dust, almost a more uplifting alternative to the more recent records from Norwegian's Immortal, found here in a track like "Vinterriket" or "Fjällhöga Nord". There is also the obvious weave of folk influences, manifest through the clean vocals, acoustic guitars and pompous majesty of the compositions, "Evig Köld Koncentrerad" and "1160 (Miovik)" being a few examples that might appeal to the fan of a Finntroll, Thyrfing, or Moonsorrow. Most tracks thread through passages of charging grace and skirts of gliding, mead swilling frolic and frenzy that are just catchy enough to be heart again, even though they don't ultimately leave that much of an impression, and (ex-Spawn of Possession) Mordechai von Revaktar's rasp, which is loud and abrasive, simply feels somewhat overbearing in the mix over such razor thin guitar lines.

Blekinge is best recommended to those who favor the Swedish sounds from Dissection and Sacramentum to Otyg and Thyfing, due largely to the mix of folk elements, and storming stringy melodies, and the fact the band don't shy away from writing a catchy chorus bit. If it's a necrotic, newsprint nightmare you seek, then it's unlikely you get much from this. The mix of the record is quite nice, with the possible exception of the vocals being a sliver loud, but the band segues into the cleaner passages and back effortlessly, and there are enough infectious guitar lines to please the atavistic wintry jarl in all of us. I didn't enjoy the album on the same plane as many of the band's obvious precursors (some listed above), but it was pleasant and crisp enough to help welcome in the first snows of December.