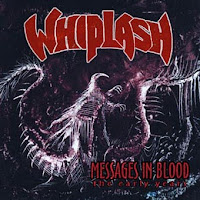 After reviving and refreshing themselves with three albums in consecutive years, one might argue that Whiplash were at the most productive period in their career, even if what was 'produced' was only a shadow at best of their 80s material. The time was right to strike with a retrospective, as most bands who can at least sell a handful of records inevitable do, and thus they issued this package through Displeased Records, a collection of demos and live cuts that were previously unavailable unless you were kicking around in their early days. I'm a little surprised they didn't tack on their earliest demo here, would have made Messages in Blood more complete, but then, who knows if they even had access to a copy when they were assembling this for release.

Otherwise, this is a decent offering which features a number of demo tracks that didn't make it onto the band's first two full-lengths, and a whopping 19 tracks in over 70 minutes! Several of the tracks from the Thunderstruk demo (1984) wound up on later albums, like "Spit On Your Grave" on Power and Pain and "Thrash 'Til Death" on Thrashback, but you also get the dirty "King with the Axe" and "Chained Up, Strapped Down", both of which should thrill fans of the early sounds of Metallica (Kill 'Em All) and Slayer (Show No Mercy). All the tracks from Looking Death in the Face (1985) would be polished and released over the first two albums, so there's not as much of a rarity value here, but if you want them in the original configurations, you'll be surprised at just how fast, violent and viral the band were, even compared to their more popular West Coast counterparts.

The majority of the disc is actually live material, culled from a pair of 1985 gigs: one in Denver, the other at the legendary CBGB's club in New York. This is unfortunately where the value of the a compilation dips, but only a little. By this I mean that the recordings sound like shit, but they do give you that nostalgic feeling of what this stuff was like on stage, but it sounds a little strained. If you're a diehard for raw sounds, then you'll probably have no gripes about it, and actually prefer some of these choices to any of the studio versions. I feel like the package might have benefited from dropping the material from one of the gigs and adding another demo, or perhaps some of the rarities the band might have accrued through their separate phases of existence, but then, we might end up with shitty outtakes from the Cult of One days, so that could be a double edged sword. In all, Messages in Blood is a decent looking collection, but it's really only got appeal for collectors and fanatics of the band's 1985-1987 period.