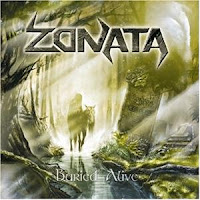 Buried Alive is the third and final full-length from Zonata, the cap on a career that all told, spanned about 4-5 years of meaningful if obscure discourse. It arrived the year after Reality, and perhaps this explains the overall similarity of the style, but there are a few details that deserve mention. For one, Buried Alive is the best produced of the band's efforts, with a richer focus on the guitars. Perhaps this is the addition of a new second player, but also the way the synthesizers are written to interact with the chords. This is also the strongest performance of Johannes Nyberg's vocals, which still carry their fundamental similarities to the Kai Hansens, Henning Basses and Joacim Cans out of Europe, but cut beautifully through the music.

This would also be the most 'progressive' sounding of their albums, but only slightly nudging out beyond Reality, as far as the dynamics and variety of riffs are concerned, whether that be the stilted anthem chorus of "The Last Step", pumping and scintillating hard rock pulse of "The Mourner's Tale", measured power of "In the Chamber", or high octane frenzy of the title track, which I'd consider the best individual track on the entire album, with a killer chorus hook and dense and effective rhythms that get the fist banging as hard as anything off their debut Tunes of Steel. There are a few other power house pieces like "Blade of the Reaper" and "Unleashed" which are nearly as thrilling, but a few dopier anthems like "Heroes of the Universe" or the mostly hit or miss melodic swagger of "A Dark Chapter" balance out the overall quality, which rests somewhere between their prior efforts.

For whatever reason, this would be the final hour of Zonata, with some members going off to similar, under the radar power mastiffs like Freternia. They never quite had the support or audience that they might have deserved, but then, they're not exactly what I'd think of as top of the line for their chosen genre, which was in clear overhaul at the time of this album's inception. More than enough adventure here for the melodic power/prog devotee, but such folks are few and far between. It's not like you could skip a rock down your suburban street and hit a few fans of Dream Theater or Fates Warning, never mind Zonata, so the potential here would likely be lost upon the more casual music fan or the bloodthirsty metal extremist. Buried Alive is a good record, maybe not as good as Reality, and with some pretty lacking lyrics, but a clear sign that the band were honing their strengths as opposed to looking sideways or backwards.