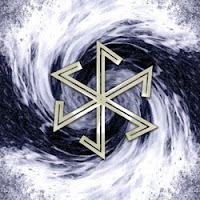 Another of those bands that wears its physical cover symbol well, IronWood is an Australian outfit that presents its sophomore album Storm Over Sea without much subtlety. This is a pretty wide array of styles, ranging from somber pianos and folksy guitars, huge vocal arrangements that might have the Beach Boys quivering in their sunny boots. Then there's the metal, which ranges from big walls of folk metal backing chords to sudden, jarring progressive sections that don't always make the most sense where they appear, and then you've got some fairly straight forward melodic black metal segments which actually turn out to be some of the least interesting on the record.

Where to start, because there is just so much here...how about the vocals? At best, they can be quite a beautiful experience, as in the folksy traipsing about in "Share the Burden" or the duet late in "Weather the Storm". At worst, they can be somewhat distracting, like in "Infinite Sea" where the cleans don't really seem up to par with the performance elsewhere on the record. Some of these vocals really shout 'what are you doing on a metal record', because clearly IronWood could be the down under equivalent to a vocal group like Fleet Foxes or something off Pet Sounds, if they put a little more work into it. I really can't claim that these sequences always fit well within the metal environs, because frankly, everything this band does that isn't metal seems so much more richer and atmospheric than what is. This is not the fault of the musicians, mind you, because everything here is well played, from the swerving of the bass to the keys and acoustics to the outbursts of proggish death/thrash metal that explode in "A Bond to Sever" or the shorter "Will to Live".

The album's composition is also a little strange, as the band veers from 3 minute tracks into larger, 11+ minute epics that are a huge calamity of ideas. Most of these ideas are individually sound, and not a song goes by here without at least some item of merit. The "Arctic Tern" instrumental is a beautiful, soothing oceanic piece, as is the extended bridge within "Weather the Storm", while the closing chords and melodies of "When It's All Over" are nice in that somber, depressive rock atmosphere. The metal riffs aren't necessarily bad, they're just not organized to stress their most important fibers, and the result is that IronWood feels not like one band, but two bands trying to separate into constituent projects. There are certainly bands out there who can make such diversity work, take Vintersorg, Borknagar or Amorphis for example, but with IronWood I felt myself struggling a little to retain interest in the one half when I was so eager for their next delve into tranquility.

Those complaints aside, along with the inconsistency of the vocals, I'd be lying to say that there wasn't thought put into this, and that there is something less than untapped potential. For an independent band, they sound extremely clear, and thus fans of better budget folk and prog metal will be pleased that they don't have to listen through some gargled mess. The maritime concept being woven through the album is appealing (their previous album :Fire:Water:Ash: dealt in fire), and you can indeed feel the moments not only through the tidal samples hovering at the edge of perception, but the actual structure of the music, the flow of the guitars. You could very easily imagine this as periods of oceanic calm being interrupted by atmospheric spasms as weather erupts. It works well enough, but I wasn't feeling most of the individual tunes outside of such a conceptual contrast. I never lost the sense that the components here could be extracted and stitched together into other patterns for greater success.

I can laud a non-European band like IronWood for writing intelligent pagan/heathen themes and not sounding silly, but I'm not sure the music has quite caught up to the vision.