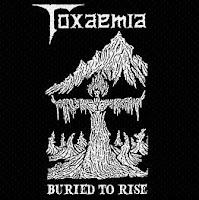 Old school Swedish death metal pundits (myself included) have been spoiled in the past few years by a great number of compilations that gather out of print demos, EPs and albums into cohesive, single packages available at a reasonable fare. Seeing that almost all of this material is well out of print, it certainly beats mining online auctions for weeks on end, paying exorbitant prices for stuff that really few could ever care about. Supply and demand in action. Well, like the treatments given to Gorement, Crematory, Interment, or the early works of Evocation, Buried to Rise goes above and beyond to give you the full monty on the little known Toxaemia, a band that operated for only a few years to produce some truly grimy death metal, more of old school Entombed and Grave with a touch of Dutch bands like Pestilence and Asphyx.

These guys were not writing university textbooks here, just good old disgusting death metal with a lot more character than complexity. Both of the band's demos, Kaleidoscopic Lunacy (1990) and Buried to Rot (1991) are included, plus the Beyond the Realm EP (1990) and some loose bits. The kicker here is that they are all given to you twice, once in their original incarnation and then once again with a Dan Swanö remix/remaster disc. I'm going to have to go with the newer mix, if only because it manages to snare the original contrast of the dark, bludgeoning tones to a new height, and its simply more audible. But having both is quite the testament to authenticity, so curmudgeons and purists will have nothing to complain about. Prior to this, I'd only heard the songs on Beyond the Realm when I was researching obscure Swedish death, so the demos are new to me, but that material is pretty consistent in style, if a little less intense than "Beyond the Realm" or the grudging, grinding slugfest that is "Expired Christianity". "Another Lie, Another Death" has my favorite riff of them all, a winding and fuzzy melodic doom eclipsed by rugged death thrashing.

From a production standpoint, the Buried to Rot demo sounds the most balanced and potent, and this too features a few of the better songs, in the crushing "Tragedies Through Centuries" and title track, but I think the EP is the top choice. There are a few different versions of the track "Crematorium", of which the 1991 is clearly the better choice. Toxaemia were hardly innovators of their style, they simply took some brutal US influence, flavored it in a little of that home brewed, thick tone and wrote some crude yet effective material that would have been ripe for a mosh pit. But it's certainly authentic feeling, without the added burden of nostalgic intent. Nothing here would have qualified for a Left Hand Path, Indecent & Obscene or a You'll Never See..., but it does the trick if you're honing your ears into primal, morbid chaos. That it arrives with such a completeness is only a bonus. Own this, and you own all the pride and joy of a young band in several years of dark dedication.