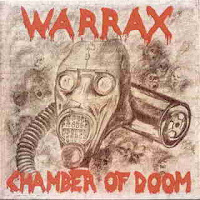 When your band's name is Warrax, and your sole album is titled Chamber of Doom, I feel that you have an inherent duty to kick all of our asses below the ground with some of the most raucous, barbaric thrash metal in all human history. Unfortunately, as I encountered this in some random sweep for obscure thrash metal I'd never heard, I was anything but impressed. The sketchy but effective cover art, smeared blood logo and title promise some hostility, but this is little more than run of the mill, average thrashing with a cohesive sense of bludgeoning musicianship, but no real riffs or songs to speak of unless you simply want to bang your brash head into a wall to anything with a guitar and mutes.

Perhaps the band I could most compare this to would be Boston's Wargasm, primarily due to the manly, almost constipated, yet melodic vocals. The riffs come thick over a noisy drum mix, and there is no loss for bass tone either. I might also add that the leads are adept enough, if only they had more central, solid songs from which to gush out their rage. Here, you've got a mix of mid paced to slow, yet busy material like "Warrax/Victim of Innocence", the Slayer into Demolition Hammer evolution of "Chamber of Doom", the Sacred Reich pacing of "Risen Again" and the crushing, crude crunch of "Murder 2nd Degree", none of which is remotely compelling outside of its own blunt existence. "Tight Grip of Society" has a half-decent riff in the verse there, again reminiscent of Slayer of Sacred Reich, but it's just not enough to warrant multiple listens.

Chamber of Doom doesn't suck, and granted, for a thrash record in the early 90s it has a fine 80s broth to its production, but it simply fails at what so many others excelled in: delivering the guitar riffs and chorus to salivate over. You can smash beer bottles to this music, and sate the violent impulses you might turn towards thrash metal for in the first place, but you really can't remember it later, scratching your head in confusion as to what that damn band's name was. With no distinct songs, and no real stir in an underground that was already abandoning this genre to brandish their shiny new Pearl Jam and Alice in Chains CDs, it appears that their fate might have determined before they even dropped a note in the studio. Warrax was a thrash band, through and through, but that is about all you can say for or against it.