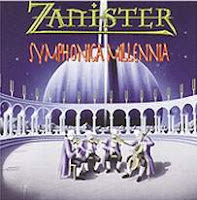 I have no idea what a 'Zanister' is, but I suppose like a 'Kenziner' or 'Metallica' it just sounds fit for a metal band's name, and without a doubt, this is pure US speed/power/heavy metal which culls its sound directly from the other projects of its seasoned membership. This is a collaboration of two guitar greats, David T. Chastain and Michael Harris, who have worked together numerous times and through Chastain's Leviathan Records imprint, which of course is also the home to Zanister. They are joined by Michael's brother Brian Harris on drums, James Martin on bass (he's performed in several other projects with Michael Harris, and the sole rookie on this album, Brian Sarvela, handles the vocals.

If you've heard Chastain, Surgeon, Spike or other bands that involved some of the lineup in the past, and appreciated them, then you're more than prepared for what Symphonica Millenia brings to the table, and you'll probably derive some entertainment out of this. There are at least 4-5 killer songs on the album, with the remainder passable, but what's most important is that it represents Chastain's return to the more traditional metal he once created through his self title band through many great albums in the 80s. It's not exactly a duplicate, especially when you've experienced the interchange between both David and Michael Harris' dual shredding abilities. Certainly, Brian Sarvela is no Leather Leone, but his voice has a good range and a cutting tone that well suits the melodic furor of the material here.

"Fighters in the Sky" is essentially Chastain upgraded to a more modern power metal feel, and it does much to heighten the excitement for the album, with solid, busy riffing and well written leads, but it's followed by some of the less interesting tracks on the album, with the exception of the "Save Me Now" bridge with a nice fusion of the rhythms and leads. Once you get to the meat of the album, basically the center of the track list, you're treated to some of the more memorable pieces. "The Edge of Sanity" mixes stout, dark Chastain grooves with great, frivolous riffing that recalls a mix of Liege Lord and Helstar, while "Let Them Live" picks your brain with some solid power riffing, and "Children of the Gods" and the glorious "Evil Will Survive" almost grant you your money's worth. There are a few I didn't care for all that much, including "Born in Cold Blood" and "Feed the Fire", but this is at least better than any of the 90s Chastain works (beyond For Those Who Dare, of course, which is superb).

The production here is good and even, without sounding too polished or overproduced, and I'll give the two guitar virtuosos credit that they manage to impress with their skills sans the slogging wank-fest they'd be capable of releasing if they so chose. If you're a fan of either man's instrumental works, there is just enough consideration for your tastes, but the banks of solos are held to their proper position amidst the verse/chorus sections and it's all quite professional. I do wish a little more effort had been placed in the vocal lines, especially the chorus sequences, because while Sarvela is more than capable of delivering, his note patterns are rarely all that memorable. Still, if you're dying to hear some US power/speed metal that you've been missing, and you've already exhausted your supply of Chastain's Leather Leone-fronted works, then I'd recommend this of the two Zanister albums, because there are some decent tunes that might take you by surprise.