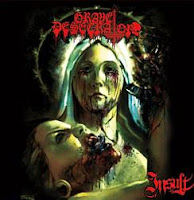 Brazil's underground black and death metal culture hasn't gotten a lot of attention lately, though the wealth of bands there is simply not in dispute. Grave Desecrator are a candidate for breaking out beyond their borders, as their brand of flashback death metal certainly brings to bear the influence of not only the early recordings of countrymen like Sarcofago, Holocausto and Mutilator; it also seems the perfect fit for the current wave of retro loving being given to bands who evoke the earlier 90s sounds of Incantation and their like. Their second full-length for Ketzer is not the first for Hells Headbangers, as they released an EP with Repulsion and Mortuary Drape covers just a few months back, but its easily an improvement over the debut Sign of Doom.

Part of this is the sheer wall of sound these Brazilians produce. Dark, carnivorous guitars embossed with just enough fuzz and fibrous Repulsion influence to represent the very graves the band desecrates, soil being churned aside with a rusted spade as the bones of the lost are uncovered and then molested. The riffing cycles channel through standard death and thrash patterns that range from Hellhammer to Bathory, and though the band is considered a hybrid of black and death, the former is quite clearly only derived through its recording aesthetics and inspirations; Insult is much more of a primal thrash and death piece, as heard clearly in the title track, "Serpent Seedline" or "Decline of Faith", or the evil indoctrination to "Stained by Blood". About the only unexpected track might be the instrumental "The Satanic Coven", which seduces and then spurns the listener with its wicked melodies.

Grave Desecrator write some pretty effective songs, but they do occasionally suffer from a little bit of familiarity and a lack of anything to look forward to. Once the initial thrust and momentum is captured, there is very little but variation on the standard themes, and I'd love to hear the band rip out some insane breakdown or more unexpected tempo shifts. That said, I do love their lead work, which is purely placed in the old school death camp, wailing monstrosities that shadow the rhythms like butchers awaiting their next shipment of flesh. Insult is a great sounding album, and should be worth at least a listen if you enjoy the gray areas of black, death and thrash that are inherent in many Hells Headbangers or Nuclear War Now! artists, but it might not be one remembered six to twelve months hence.