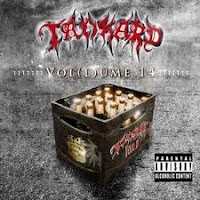 The time has come for us to grab our liquid lunches and return to the realm of the unending German thrash parade Tankard, as they pump out their 14th full-length album straight from the tap. This is an effort that might actually surprise some long term listeners of the band, since the writing seems a bit more morose and melodic this time around, at times falling more into the speed/power category than strictly a thrashing, but this is not exactly news, as the drunks have been incorporating such tactics on many of their 21st century releases like Thirst, Beast of Bourbon, or the excellent Beauty and the Beer from 2006, the last of which is the closest parallel one could make to the sound here, though it's not necessarily that good.

Now, I'm not saying this will appeal to everyone that has followed the band since the untouchable first three albums of their career, because obviously a lot of that virile, bursting energy has vacated its physical premises. The band are getting on in years, and you're not going to be hearing any "Shit-Faced" or "Zombie Attack" level material, but as an approximation of 'mature' Tankard, Vol(l)ume 14 is not without its merits. About half the songs are drop dead catchy, and the other half just passable. As much as it's strange to hear Tankard singing about Facebook, Twitter, obesity, and other plagues of our 21st century existence, and not tearing up hotel rooms and puking, it's also fairly entertaining, and not the first time the band have decided to stick with the issues of the day. "Fat Snatchers (The Hippo Effect)", "The Agency", "Condemnation" and "Beck's In the City" are three of my choices here, each with a catchy chorus and solidly plotted riffing that should keep your neck hammering despite their dynamics, and the sort of cleverly titled "BP (Black Plague)" is Tankard's tribute to the Gulf Oil Crisis, though not one of the better songs.

Where the album does sort of dissemble is in its opening and closing tracks, the former of which, "Time Warp" is simply not that strung. Almost anything else here would have served better, though Gerre's vocals in the bridge are quite good (he sounds excellent throughout, as he maintains the bitter sneer of his German accent). "Weekend Warriors", the 7+ minute finale, is not the first song of its title (Iron Maiden beat them to it, among others), but the tribute to paintball and physical excess beyond the work week is only firing on about half of its cylinders, with Any Gutjahr's riffs weaving between excellence and oblivion. A few other tunes, like the spiky and melodic "Rules for Fools" and "Somewhere in Nowhere" promise a lot but don't pack in enough punch, both seemingly ineffective and similar to the superb "We Still Drink the Old Ways" from Beauty and the Beer.

Listening straight through, though, there's not a whole lot to complain about. It doesn't number among the band's greater efforts, but it's right about on par with its direct predecessor Thirst, with a few tracks worthy of a hand picked career compilation. The production sounds about as good as the last two, and the musicianship is at the usual high standards, with a fair amount of deviation and variation in the track structures, and ultimately, I'd probably take this over the latest offerings from Destruction, Sodom or Holy Moses. Tankard is very much alive, despite the obvious cirrhosis and dead brain cells, reliable like your favorite Pilsner glass, and sooner or later, they'll knock another album out of the park. This is not that, but neither is it a waste of time.