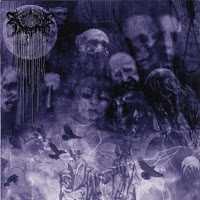 It was probably inevitable that a musician so disenchanted with the status quo, so at odds with the living as Malefic (Scott Conner) would choose a finite period in which to vent his opaque nightmares to the audio obsessed, and thus the fact that he has stamped Portal of Sorrow as the final Xasthur full-length of that particular entity was not a surprise. Judging from the general quality of his prior efforts, which ranged from sobering and curious to downright suicidally indulgent, I could only have hoped that this belabored swan song would channel the same hazy, wondrous specters as prior issues. Sadly, this is not the case, and despite its variation and interesting atmospheric motifs, Portal of Sorrow is perhaps the least engrossing of his albums, though the 14 tracks do conceal a few priority gems.

The sultry, sickening despair is inaugurated with the roiling clean guitars of the instrumental title track, flecked with twisted ambiance and funeral organs that provide an early burial for this once prolific cellar dweller. "Broken Glass Christening" cycles back to familiar territory, the ghostlike strains of disgusting, repressed black metal painted with Malefic's tortured screaming, low piano keys central in the mix while ethereal, feminine choirs half-haunt the landscape. "Shrine of Failure" continues the grim portrait with aimless shredded guitars over echoing spoken words and coiled dissonance, and while this is sort of piece is not a great distance from his major works like the stunning All Reflections Drained, it just lacks anything truly gripping. The female vocals return for "Stream of Subconsciousness", one of the album's most accessible pieces, and it works rather well with the sad guitar lines and mumble jumbled vitriol in the background, proving that not all hope is lost as we mine deeper into the wealth of tracks.

"Karma/Death" is another winner, a fibrous, writhing serpent of fuzzy melodic glaze, and I also enjoyed the more ambient driven "Horizon of Plastic Caskets", or the funeral black doom of "This Abyss Holds the Mirror" with its more guttural vocal qualities, but there are a number of forgettable shorter instrumental segments like "Mesmerized by Misery" or the lush but empty tranquility of "Mourning Tomorrow" that serve to break the woeful climate. Of the later tracks, "Released from This Earth" is notable for the scarce balance of the pianos, eerie female vocals and thick, oozing bass, "The Darkest Light" being a very familiar approach for Xasthur that could be found on a number of the albums, but in all there seems an inconsistency, a disconnect to the usual disconnect which makes Conner's albums so engrossing.

There are plenty who won't bat an eyelid at the disappearance of this project, as Conner has long suffered and thrived in a love/hate relationship with black metal fans of all edicts, but I feel like he's made the right decision. Personally, I've slowly developed a fondness for a number of the Xasthur works, but I'm not sure where else there would be to go for this particular entity, and I can hear in Portal of Sorrow exactly why Malefic has become so disenchanted with this path. This is not the worst of albums to leave us on, and to be accurate it's got most of the oppressive characteristics common to his releases, but it just doesn't feel quite so dark. It's almost as if the album itself were exhausted, just trying to sluggishly gesture itself through an hour's playtime, and I never felt as lost in labyrinthine caverns of regret as I did in past years listening through his music. That's not to imply this is 'happy', because it is truly not, but I turn towards this man's music to feel drugged, shaken and truly fucked, not drugged, vapid dulled, and Portal of Sorrow is just too often guilty of the latter.