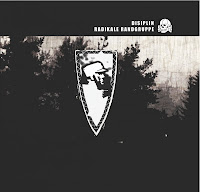 Earlier this year brought a major surprise in Disiplin's Hostis Humani Generis, a massive shift in direction for the Norse underdogs as they decided to tread an obscure, industrial waste of potential, shucking the rampant black metal of earlier efforts like their 2003 s/t debut or 2005's Anti-Life. Fortunately, they excelled in this new terrain, providing one of the richer, more disgusting mechanical offerings of this type all year, and without wasting much time, they have stormed straight into the follow-up, Radikal Randgruppe, which is not a hell of a lot different. Still caustic, still effervescent, and still crushing. In fact, if there's any change at all, it's that a few of the songs here are more simplistic, basic without being accessible.

The formula is, as ever, intriguing. Program your cold, apocryphal beats, slosh them in heavily distorted black metal rasping, feedback and raunchy guitar lines and then festoon the funeral of sound with bizarre, climactic samples. "Me Ne Frego" chugs along with abandon, subtle textural wails being heard against the froth and swelter of aggravated noise, Wulfclaw's vocals not of this Earth. "Triarii" sounds like the black metal that might be conceived solely through soulless machines if they were given the run of the shop, writhing passages and haunting echoes over a steady, unswerving charge worthy of late 80s Ministry, a more hopped up Red Harvest. Some tracks channel almost pure noise, like "White Earth", which many will find harrowing, but the group also has a beautiful side to them, conjured in the dim, carnal spheres of "The Golden Age" or 15 minute downbeat finale "The Empire".

Granted, beauty is in the eye of the beholder, and Radikale Randgruppe is nearly as hostile as its predecessor, though I was never immersed to the same degree. Raw as fuck, filthy distortion, pain smitten, straightforward compositions that rarely fluctuate, and accidental melodies that shine like sweet razors in a rain of viscera. The album will not suit everyone, since industrial black metal is such a small niche, and it occasionally meanders along the homicidal path of a one track mind, but it successfully continues the tirade of creative impulse that the band lacked in their infant years, worth a gander if you were into Hostis Humani Generis, even if it lacks that record's element of surprise.