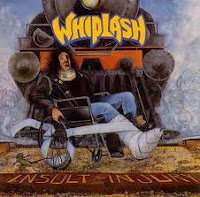 While Ticket to Mayhem had been a refinement and progression directly of the New Jersey band's debut Power and Pain, their third effort Insult to Injury would see changes on a larger scale, not the least of which was the decision to bring in a separate vocalist, freeing up Tony Portaro to his guitar and writing duties without the added pressure. This would be the first of three frontmen Whiplash would cycle through before finally returning to themselves, but to be fair, Glenn Hansen did a pretty bang-up job with this album, his slick and knife-like, melodic delivery a manageable fit for the busy rhythm section, responsible for some of the best chorus sections the band have ever committed to disc.

But he's not the only difference here, the band have decided to temper the speed of their past efforts with more accessible tracks in general, and here is one of those cases where such a decision pays off. The first five tracks on this album are all quite good, from the nut busting, mosh epic "Voice of Sanity" with blazon guitars not unlike California's Vio-Lence, and Glenn wailing away over the crashing rhythmic waves. "Hiroshima" has some solid bass performance ala the late Tony Bono, and an even more memorable chorus section, while title track "Insult to Injury" is winding and playful do to the melodic mutes of the verse and popping guitar fills. I would say "Dementia Thirteen" is my favorite of the entire album, with the soothing walls of flange on the verse guitars, the strutting bass, and fairly rock & roll styled vocals which just work. "Essence of Evil" is yet another scorcher with great, working man riffs and another memorable, escalating chorus.

The rest of the record is not quite so evenly distributed in quality. You've got a few gems like the wild, weaving "Rape of the Mind" with its groovy rhythm guitars and goofy but endearing chorus, and then "Pistolwhipped" which is perhaps the closest the band will get here to the raw, speed thrashing of Ticket to Mayhem or Power and Pain, with the obvious difference in vocals. "Witness to the Terror" and "Battlescars" have their moments, but neither is quite so difficult to brush off the memory once the riffing has subsided. The final track here is an instrumental ironically named "Ticket to Mayhem/4 E.S." which certainly has some potential in its mix of desperate, melodic clean guitars and thrashing palm mutes, but it feels in need of vocals, not really being wanky enough aside from a few solo licks to succeed in its current format.

All told though, Insult to Injury is one of the better of Whiplash's catalog, and remains so to this day, especially when you pair it up against the next two albums, which see a remarkable and unwelcome shift in focus that retains only a part of the band's thrashing value. The mix here is bold and bright, and clearly the band were going for the status of an album like Master of Puppets or So Far, So Good, So What?, even if the songs are really not at that same level. I can recall a generally negative reaction to this when it was released, but hardly a loud one, since the band were never in the more popular thrash camp of the late 80s, just another of those publicly undiscovered gems that were lurking on the Roadracer label of the day. It's still got enough of Ticket to Mayhem in it to sate fans of that album, but on the whole its a positive progression, even if it can't match its predecessor track for track.