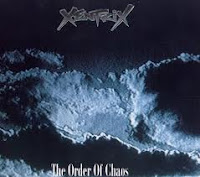 The Order of Chaos was a single/EP release through Roadracer that was used to promote their third album Kin, but let's be real about this: in 1992, was there much cause for excitement over anything in the sinking thrash genre? With the very rare exception, no, there wasn't, and Xentrix enforced this decline with some rather inept decisions to mellow themselves out even further from the sampling we heard on the Dilute to Taste EP, becoming the elevator music equivalent of thrash metal, so this is but the warm up to another major disappointment, made more so by the fact that the band's sophomore For Whose Advantage? had been quite promising.

Basically, this single release captures two tracks from the full-length, "The Order of Chaos" and "All Bleed Red". The former makes sense as the single and lead-in to the album, because sadly it is the best song found within, with somber melodic guitars and pulsing muted thrash rhythms that show the spirit hasn't entirely fled the band. However, as the new originals from Dilute to Taste hinted, the band is now about absorbing the listener into a more spacious envelope of sound. "All Bleed Red" is, coincidentally, the second best song on Kin, and perhaps the closest on that album to the materail from For Whose Advantage? Rounding this out is a cover of The Teardrop Explodes' "Reward", a peppy post-punk piece given a slightly metallic treatment that is pretty forgettable, but at least it's no "Ghost Busters"...

It's almost ironic that most of the best metallic content of the Kin album is contained within this single, but ultimately it's a worthless release, since you can probably get the full-length for a few dollars more and never miss the added content. I wouldn't call the cover 'bad', and I'm sure Xentrix felt it showed off their diverse tastes in music, but this isn't really a band I want to hear outside of their riffier, energetic flair like "Questions" or "Balance of Power", and The Order of Chaos is relegated to yet another piece of worn, useless plastic that might have sold a few hundred copies at shows or record shops, but few if any would ever care about again.