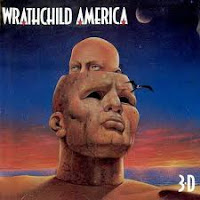 You didn't have to look far to realize that something has changed within the Wrathchild America camp. Just one glance at the cover image and you'll find something even more perplexing than the debut, which was a fucking guy stuck in a maze! Okay, perhaps its not 'perplexing', but 3-D certainly looks surreal, and even the logo had changed from something expected to something more uniform, modern, and...chic? Thankfully for us all, the actual musical content has a lot going to it, so it's hardly the product of some pretentious ejaculation. In fact, Wrathchild America were one of the few bands who seemed as if they'd survive the wake of the great thrash metal purge of 1991-92...and they did. But not as Wrathchild America.

3-D shows some a pretty sound progression from the material of Climbin' the Walls, which was largely just a flirtation with Metallica and Megadeth worship that failed to even take the coat of those bands' shadows in the 80s. Here, we've got a band trying something new without sucking at it. The choruses are catchy, the songs more uniquely structured, and you can hear that the band are bringing in the outside influences of jazz, and perhaps a tiny element of funk, without soiling themselves over it. The thrash & hard rock mix of Brad Divens' vocals is a more subdued hue, but a strong improvement over the debut, and where the rest of the band add in some contributions, it sounds quite good. As for the composition itself, just about every song has a few riffs worth going back to, and as a whole it flows rather nicely. You'll grow to trust the album after only a few songs, and it never betrays you, provided you've got a slightly more open mind than normal when approaching a thrash record.

The songs. Many of them are great, not the least of which include the opener "3-D Man", an oddly structured, strutting rally against the narrow minded, and then "Spy", which was the album's 'hit single' if every there were one. This is a pretty impressive, accessible tune with a dainty walking bassline that is eventually laid on thicker with the guitar chords, and I love the private eye philosophy in the lyrics, even if one might argue that this is not really entirely 'metal'. Sure, it's fun, the sort of campy fun that I often don't appreciate on an album like this, but it's very well written, if not the best song here. "Gentleman Death", "Forever Alone" and the other 'silly' piece here "Surrounded by Idiots" are all just as riffy, with solid melodic chords being used against catchy, simple thrash riffs that felt fresh and crisp in their day, as they still do. I also enjoy the groove and swagger of "Another Nameless Face" and "Desert Grins", and the eerie ballad verses of "Draintime".

If you've got the CD, there's another bonus silly song, and it's not an original. No worries though, this isn't Pink Floyd, but a blues rock cover of "I Ain't Drunk, I'm Just Drinkin'" by Albert Collins. Of course, the original is funny, and they don't really fuck around with it, but it does sort of tie together the band's sense of security around incorporating outside elements into their music, and unlike so many faltering thrash bands trying to cast their last chips into the game, Wrathchild America didn't quite fail at it. Okay, well they changed their name to Souls at Zero and put out two more albums of middling quality, so I guess they felt they must have, but at least drummer Shannon Larkin got to perform with Glenn Tipton and even a gig with Black Sabbath. Souls at Zero does feel like a natural continuation of the band's experimentation here, but it's nothing to write home about, so while it's not perfect, I'll have to nominate 3-D as remaining the best work of these musicians, and something to check out if you're interested in what bands were trying right as the bubble burst on this beloved genre.