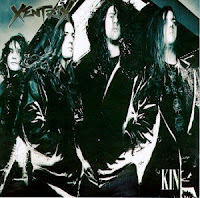 Want to know something I've never needed in my entire life? A picture of a thrash band on the cover of their album. There might be an exception here or there (Suicidal Tendencies comes to mind), but surely, the iconic cover art and logos are such an essential element to the genre, whether modern or retrospective, and to see Xentrix strike a pose on their third long player seemed to hint at a different wind blowing from the isles of their origin, a muse hissing a voice of change throughout the pantheon. Kin is, in fact, the point at which this promising English thrash band, who were in steady ascent through their first two records, jumped the shark, and though it's not as jilting a horror as, say Vol 8: The Threat is Real, or St. Anger, or Mourning Has Broken, it's so underwhelming that you almost feel pity for the nine tracks within.

Two of these tracks appeared on The Order of Chaos single, and represented some of the more energetic, loyal thrash fare you'll find here, but then, neither of them is highly compelling. "The Order of Chaos" itself weaves spikes of longing melody through a pattern of mutes and chords that doesn't have the riffing quality of their past compositions, and though Astley turns in a fairly emotional performance, it's nothing more than pleasant. "All Bleed Red" is one of the few real aggressors here, a song quite in line with their sophomore effort, but lacking that memorable chorus or guitar passage to number it among their better pieces. There are a few more half-assed thrashers here like "Waiting" and "A Friend to You" which also have some refined, melodic tints that recall Metallica, but unfortunately these too are not encompassed within a greater song.

But the real problem here is that the band have gone limp on us, or rather, decided to experiment with slowing some of their cuts to the point that they were more likely to hit the soft rock airwaves than the metal channel, and while I'm not completely opposed to such a transition, and Xentrix manage to hang on to barely tolerable with it, it gets a little tiring when these drawn out emotions are prevalent on so much of the album, like "No More Time", "Release", "Come Tomorrow". "See Through You" is interesting, with a tint of doom metal to it, but it's still lacking something, and by the time the band bust out the closing blitz of "Another You", the album is really beyond saving, which is a shame, because although it just sounds like a "Questions, Jr.", Kin really need more injections of energy like this to pace it out.

Kin is largely lackluster with only a few moments of the band revealing themselves, and it's no surprise that this would be the finale with Roadrunner/Roadracer Records, what with the massive decline in interest for this sort of metal, or rather, the sort Xentrix used to play. I can't help but conjure images of a prize stallion, looking good for its first few races, then succumbing to horrible injury, running slowly and painfully, before being put out of its misery. Someone needs to inform the next of kin, because by the sound of this, we've lost another one...