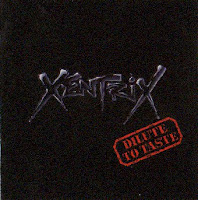 Xentrix were a band that constantly busied themselves in their off years by releasing singles and EPs like this one to keep their small but enthusiastic fanbase sated until they could whip up the next batch of central career motivators. Dilute to Taste is these days available on the CD re-release of For Whose Advantage?, and that is probably the preferred location to experience it if you've only lately gotten into their material, due to the sheer economic convenience. I personally grabbed this on cassette, and it's not much to look at, but the contents aren't so disappointing in the grand scheme of the band's history, looking back on the travesty that was Ghost Busters...

There are two new tracks present, that you won't find elsewhere, and both are flush with the stylistic direction of For Whose Advantage?, and the real reason to obtain this EP, even if they leave a little to be desired. "Pure Thought" is, as its name implies, a pretty pensive, mellowed thrasher, and if you've heard their later album Kin, a natural stepping stone in the transition to the band's melodic, 'thoughtful' thrash patterns that they would continue exploring. "Shadows of Doubt" starts with a nice, somber clean guitar segment before laying out the chords and a taut yet simplistic thrasher, once again making a great use of expansive space rather than truly busy thrashing riffs. There are muted fills here or there, but largely it just relies on bigger chords and Astley's inflections of emotional angst, which thankfully are not repulsive.

The remainder of the EP is filled out by a quartet of live cuts, including "Balance of Power" and "Crimes" from Shattered Existence, both of which sound decent, and "Kept in the Dark", which is not one of my favorites from For Whose Advantage?, but it's not bad. Sadly, the final track is their cover of "Ghostbusters", which I've already expressed my feelings about, and sounds no better in the live setting, even if some drunken jackasses are actually requesting it. How would they look at themselves in the morning? Even Astley shouts 'You don't really wanna hear Ghost Busters, do ya?' to pump up the crowd, who should have been leaving at even the suggestion. But nothing else here is offensive, so it's worth hearing if you enjoyed the band's sophomore, but not worth paying for independently if you can't get the version with it included.