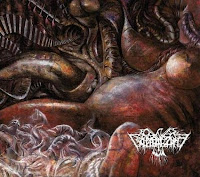 Muukulainen Puhuu turned out to be my top choice in all metal music for 2009, so I've naturally been very excited to hear whatever Oranssi Pazuzu would do to follow that, and it has now manifest in this split with a fellow Finnish act, bizarrely named Candy Cane, who are nearly as interesting in their approach velocity and have existed for 15 years now, releasing a number of albums, splits through the underground. As it would happen, these two are quite the match for one another, both chiming in from left field while paying service to the traditions of their core genre through the malicious echo of their rasped vocals and haunting chagrin of the guitar passages.

Candy Cane takes the first half of the split, with five numerically titled (they look like dates) tracks of treacherous, widespread havoc. "16061978" is an intro teaser with some doom laden riffs covered in scarce synthesizers and feedback, wandering into the three minute clowning black surge of "10091989" with death grunts and rasps wrangling above the din of straight up, darkly melodic riffing and flourishes of piano and oddness. "03012007" is not a lot different, perhaps imbued with some groovier breakdowns, but "25021994" is the most grimly symphonic and interesting of their input to the release, with a teething atmosphere created in the currents of the hydraulic bouncing turmoil of the verse and then the surreal, mocking atmosphere of the extended bridge. "29112008" returns to the jarring piano inflections over scorching primacy, with almost a deathgrind aesthetic paired to its elevating notation.

The Oranssi Pazuzu offerings are thankfully all new, and they pick up directly where their debut left off, alien, psychedelic and storming, like being thrust into a parallel reality in which acid cowboys are all that is left of humanity to discover the ruins of cultures both strange and beautiful, while asteroids and rusted debris dowse the star-blurred skies in collision. "Ole Muukualainen" fuses deep, sludgy punk rhythms and freak-out, jangling cleaner guitars into a vortex of uncomfortable grooves, a bazaar of the bizarre, and its immediately engrossing. "Unihämähäkki" lays out a big bass groove, not unlike that of "Korppi" from the debut, and then smothers it in Voivod-esque discord and glamorous, haunted tears of melody. "Torni" features a few moments of evolving, proggy jamming before it picks up into the swaggering of the chorus, spaced out guitars wailing off like lit angels to the atmosphere, and "Farmakologisen Kultin Puutarhassa" ends the effort with brooding, cutting currents of fibrous torture, Jun-His vocals the one stalagmite tethering the listener to the grim, oppressive sanity of his/her surroundings.

Of the two bands here, I was far more impressed by Oranssi, but that isn't much of a surprise, since they're one of the most incredulous new artists in all of extreme metal. That said, Candy Cane was actually pretty interesting, I just didn't feel any staying power in their compositions, where I'll be listening through "Torni" and "Unihämähäkki" on repeat until the next full-length is delivered. However, while I might not have thought it possible to find a stylistic balance with Oranssi, that has certainly been achieved here; thematically the bands are both strange and compelling. If you enjoyed Muukulainen Puhuu at all, then it goes without saying that this is a mandatory purchase, with the Candy Cane tracks a curious, added incentive to the hours of paranoid dementia that lie before you.