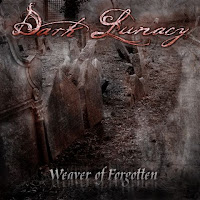 Dark Lunacy drew their fair share of cult and critical interest through past works like Devoid and Forget Me Not, and justifiably so. Their mix of Romantic themes and classical strings with simple but savvy death metal stood out against the backdrop of stagnation that sours both the melodic death and Gothic metal scenes which this act straddles. Their latest, fourth full-length effort Weaver of Forgotten does little to truly advance the dialogue they started around the turn of the century, it's at least diverse and interesting. This time, the band have honed in on a more mechanical, progressive element which at times reminds me of another Italian outfit, Sadist (and they've recently acquired bassist Andy from that outfit).

Weaver of Forgotten has nothing on that other band's latest, Season in Silence, but it's enough of an adventure that the ears feel they're being assaulted with fresh sounds. There's a backbone of grooved, simplistic chugging that spans tracks like "Archangel'sk" or "Epiclesis" and tends to distract one with its blunt familiarity, but these are condensed into walls of lamenting, multi tracked guitars and Mike Lunacy's harsh, barked vocals, which are honestly hit or miss. You'll still hear some string arrangements, as in the intro of "Masquerade", or woven into the depths of numerous other tunes, congregating with pianos, synthesizers, and a slight hint of techno (intro to "Curtains", for example). Tracks like "Sybir" or "Forgotten" offer interesting passages ripe with atmosphere or hammering rhythms, though they're admittedly not the most memorable of fare one might expect from the band.

The bass of Andy Marchini is another huge feature of the album, and perhaps that is why I'm so reminded of Sadist here, due to the similar jazzed up undertow. However, there are a few issues holding the record back from being more than a briefly pleasurable curiosity, and these include the dull chugging of many of the guitar lines, letting the synthesizers do the work, and the overall production, which feels a bit too digital and uneven. The vocals are somewhat choppy, and much of the album lacks the really effective composition of its elder siblings. Fans of their earlier efforts or some similar Gothic/death/doom metal hybrids might fall in love here, but I felt it was subpar to their previous effort The Diarist, not to mention Forget Me Not, which I'd consider their best. Dark Lunacy still stand their own ground, and there are a few moments on the album where a hazy bliss sets in, a melancholic grandeur, but they're ultimately eclipsed by the modern, groove flourishes infesting so much of the material.