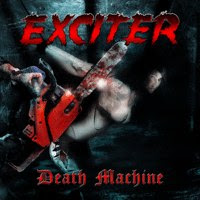 I feel like the problem for a legendary band like Exciter is that they already forged such a concrete proof of concept in their early output that there is almost no impetus to listen to any of their catalog post- Unveiling the Wicked (1986). Along with early Razor, they were the gods of rugged Canadian speed metal, known for their wild, bullshit free live sets and ripping, screeching vocals over John Ricci's non stop traditional speed/power riffs. So yeah, give me Heavy Metal Maniac, Violence & Force or Long Live the Loud any day, crank it up and watch my frown turn upside down, but I've simply not felt in the least bit compelled by almost anything the band created in the 90s or beyond.

However, the band still needs to put some food on the table, and their van on the map as it launches the speed metal assault on any shore, so they grace us with new albums from time to time. Death Machine is the second effort with Kenny 'Metal Mouth' Winter on vocals, and he's unfortunately the one interesting aspect of this record. He's a little more snarling and wicked sounding than his predecessors Beehler or Belanger, almost as if an Udo Dirkschneider had signed up for duties here, and he's thoroughly entertaining. As for the music, it's the standard variety of familiar sounding, incessant guitars, ranging from fast ("Demented Prisoners") to really fast ("Razor In Your Back"), with only a few stops for breath (fist pumper "Power and Domination" being an example), and Winter shifting back and forth between his sneers and jeers and beautiful, high pitched screams. Ricci's leads are frivolous but tight, the rhythm section of Cohen and Charron compact and level enough to burn these mothers home.

But this is Exciter. You're not here for rocket science and innovation, you're just here to have molten metal poured in your ears for a half hour or so until you move to the next aspect of your life. To that extent, Death Machine is surely not a bad album. It doesn't stop for directions and it doesn't take an excess amount of time pissing around the roadside bathrooms. Ricci definitely has more mediocre material than this under his belt, but there's not a lot here that I feel an urge to revisit. None of the chorus parts seem legendary, despite Winter's enthusiasm, and the guitars are just functional enough to blow speakers and secure blowjobs after the fact. The production is nice and thick, but retains some of the raw frenzy of the band's yester years. This is one for the speed metal fans, and the speed metal fans only, and it seems Exciter has become all too comfortable in this niche. It wouldn't hurt them to write some catchier music, but then, it's not as if this is a bad album, just sadly average, like the last half dozen.