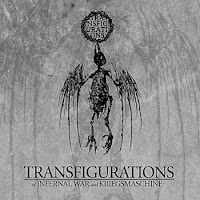 Participate in nearly any conversation about Polish black metal, which to this day is largely still underground (unlike several of their death metal exports) and the band Infernal War is likely to come up as a subject of interest. Past recordings have heralded the band as one of the true, blasting titans of this scene, competitive against their Swedish and Norse peers; overwhelming, efficient and indisputably savage. I've met several persons who were just astounded by the band, recommending them to me as if I simply would not believe what I was hearing, like some new plateau of extremity had been met. Well, I feel that I'd be exaggerating to claim that Terrorfront and Redesekration had any impact beyond mere enjoyment on me, being standard black metal at intense speeds with heavy drumming.

Their contribution to this Transfigurations split is fairly varied though, occupying three of the five tracks, first with the writhing, slower paced "Primal Degradation" and the even more cautious, creeping "Into the Vortex of Naught" (the best song on the EP), and lastly "Incipit Chaos", a black/thrash piece with a few decent riffs to it. As usual, Infernal War sound bold and clear, lacking some of the atmosphere of lesser structured acts, but making up for that with a sinister professionalism. 'I could kick your ass while even wearing a suit' type fare here, and to be frank it goes off without a hitch. If you enjoyed their previous albums, then I can't see a reason you wouldn't dive right, but there's little of lasting value despite a few spiky riffs in the latter two pieces, and decent ambient intros.

Their companions here are countrymen Kriegsmaschine, who have a rougher, more rock fueled approach to the genre, more than evident in "Onward Destrudo", with its razing walls of thrashing force eclipsed by the higher pitched chords churning above them. "Fear and Loathing in Gethsemane" is a longer piece, 8 minutes in fact, and ranges from steady grooving to a rabid blasting bridge over which the vocals howl, a blackened storm warning with some decent slices of melody inserted. The latter is the more interesting of their contributions, but the former is the better due to its fist fighting inertia, and when all is said and done, you've got about 28 minutes of black metal here that strays a little left of the beaten path, even progressive, though it remains confident in its roots.

Transfigurations is not a recording I'll be coming back to often, but it's certainly a fair pairing of two bands that stick their necks just slightly above the status quo. If you're expecting expressive rawness with filthy, disheveled vocals, this is not something that is like to sate you. Just the drumming in "Fear and Loathing in Gethesmane", or the echoing vocals and brutal hypnotic guitars, are enough to convince all that Kriegsmaschine are an evolutionary, stunning force just waiting to break out with the proper material, and Infernal War won't likely require even the semblance of an introduction, as they've stirred up their share of the hornets' nest already. The five tracks collected here might not be especially great examples of their work, but that a strong amount of effort was involved in their concoction is not up or debate. Along with Furia and Massemord, they shamelessly represent an aggressive generation of Polish persistence.