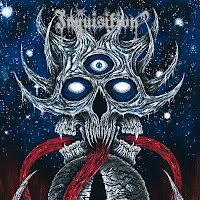 Though the warbling, frog-like vocals are the one facet that makes Inquisition such a divisive band among extreme metal fans, it's almost ironic that they provide the one characteristic you can truly rely on as the former Colombians crash through each evolutionary portal they encounter. Ominous Doctrines of the Perpetual Mystical Macrocosm is more than a mouthful, in fact it's probably the most stupendous album title this year, but it's shocking how well they've morphed into a mix of blazing, glorious occult black metal and sheer dynamic will. Here is an album that will keep you coming back for further helpings due to its variation and breadth, striking high and low, fast and slow.

"Astral Path to Supreme Majesties" honors its very 90s, cliche black metal title with a savage foray into storming melodic severity, with impetuous, blasting drums offsetting the blossoming bounce of the chords. I am reminded of Enslaved or Immortal during their transitions from the orthodox to the majestic, and this is confirmed with the massive melodic breakdown taken before 1:30. "Command of the Dark Crown" is quite different, at least after the din of the open velocity chords dies into a swaggering, unusual gait, which is carried into the even more timid but pondering "Desolate Funeral Chant", then back into the blast-o-sphere of "Cosmic Invocation Rites", or the pounding "Crepuscular Battle Hymn". Two of my favorite tracks here include the deepest on the track list, "Hymn for a Dead Star" and "Across the Abyss Ancient Horns Gray", which measure across multiple, inspirational surges and segues.

Musically, the album is not entirely unlike its predecessor Nefarious Dismal Orations, but cast in a more uplifting light. The vocals seem a bit better mixed, sitting behind the thriving chords rather than echoing across them, but to be honest I preferred the latter approach. The chords they commit here are well sequenced but slightly less effective, and there are some passages in which I found myself less interested than others. A few of the songs like "Upon the Fire Winged Demon" wring sheer power out of their brevity and directness, but in pieces like "Desolate Funeral Chant" or the title track, there is certainly some fat to be trimmed. Ultimately, though, Inquisition have mustered yet another interesting album, even if it's not the measure of some past works, and honestly it might just be their most accessible yet, worthy of the attentions of pagan and folk metal fans as much as the venturesome grim.