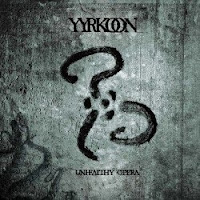 Whatever downwards momentum the French band had suffered in their 'oniric' transition from debut to sophomore was surely halted at the mighty Occult Medicine, upon which Yyrkoon finally declared that they were indeed a DEATH metal band and decided to act like such was the case, without entirely abandoning their progressive and melodic inclinations. That 2004 effort was and remains clearly my favorite of the band's favorite work, but it's follow-up Unhealthy Opera is thankfully not far behind in terms of effective power, as the band shun none of that newly discovered surge in brutality. Like its predecessor, though, this album is a far cry from mindless guttural banality, but an explosion of taste that never once abandons that fundamental concept inherent in 99% of good metal: the fucking riff.

Yes, the guitars are as carefully constructed as the album's next eldest sibling, and the result is pure, unconcealed excellence. The immediacy of the dark ambient intro "Something Breathes" parts for the shifting juggernaut of the title track, storms of thick riffs glistening against the melodic subtext, grooves emerging and then submerging throughout the verse as the drums lilt and stagger. Naturally, this track builds an enthusiasm that the band are not about to let loose, as they quake through the punishing developments of "From the Depths" and the caustic bounce of "Avatar Ceremony". Once the beautiful guitar instrumental "Temple of Infinity" cedes to the crushing "Abnormal Intrusion", it becomes clear that this is going to be quite the solid goddamn album, and there is nothing to sway you from this opinion later, for tracks "Screaming Shores", "Horror from the Sea" and the jerking closer "...of Madness" all deliver. "The Book" is probably the least interesting track here, but it's still heavily laden in explosive dynamics and deep enough grooves that there's no sore thumb about it.

In fact, if there's anything inferior here to Occult Medicine, it's solely the fact that the band is carving out more of the same turf, without the absolutely surprise by which that particular effort took me. I wasn't hoping for much after the rather average Dying Sun, but the band amplified their effectiveness in coordination with their commitment to extremity, and Stéphane Souteyrand has never sounded this good before, his throat finding not only power in the low end, but also his cleans are more sparse and improved. This is a direct continuance of that cycle, with the individual riffs perhaps being fleshed out ever so slightly, mildly more accessible than the stupendous bombast of their 2004 opus, but barking up such a similar tree that the fan of one has no choice but to experience the glory of the other. Season with some Andy LaRocque guest leads ("Horror from the Sea") and Mythos-inspired lyrics, and the album well earns its keep. Though in recent years the band has taken a hiatus, and we may never hear from them again, Yyrkoon should nonetheless be praised for breaching the creative cocoon of their earlier efforts to metamorphose into one of the very finest of French death metal artists.