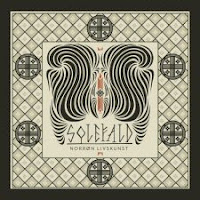 After an unusual and unexpected swerve into familiar, mythological territory with their pair of Icelandic Odyssey albums, Solefald use their 7th full length Norrøn Livskunst to return to the wilder waters we've often associated them with in the past, leaving a single track ("Waves Over Valhalla") to wrap up a sort of pseudo-trilogy. Those cultural excursions were not unwelcome, and the band still managed to slap their trademark brand of uncanny surrealism to the tales, but this feels a lot more like a natural progression from past works like Neonism, Pills Against the Ageless Ills and In Harmonia Universali, all of which more dutifully represented the straight-jacketed writing of Cornelius and Lazare, one of Norway's more irresistible but bizarre duos waltzing on the outskirts of the extreme metal classification. This is still a concept album, but it motions forward into the culture of the country's transition from the 19th to 20th centuries.

Norrøn Livskunst translates into something like 'Norse Life Art', which is perhaps the only broad strokes one could use to paint the structured variation found on this record, which is easily one of their best. Organ sounds are threaded throughout the compositions, and horns and guitars clash amidst the revelry of the melodic undertow, but by far the star of the show here would be the vocal arrangements, which are simply the most insane and superior of the band's career thus far. Tracks like "Norrøn Livskunst", "Song Til Stormen" and "Til Heimen Yver Havet" mix the morose, multi tiered choirs with the barking excess so common to the genre, and though the riffs stream below like glorious swells of storm, it is the vocals which sail off so deeply into your conscience, making this a memorable trip into the cultural past and present the band is exploring. All are performed to perfection here, and they really give you a sense of not only the band's place in the world, but the madness of artisans beyond devoted to their craft.

This IS a Solefald record, of course, and you should still expect anomalies to bludgeon you out of left field, the madness made ultimately manifest. No better example here than the playful, phonetic "Tittentattenteksti", an unforgettable piece which makes fantastic use of guest vocals courtesy of Agnete Kjolsrud, who sounds here like a mischievous teen witch dancing on your bones and trampling your dreams while she cycles through 'at' sounds along the simple and thick, melodious guitar lines, while the male vocals bark behind them. This would already be enough to make black metal purists panic and everyone else gargle with joy or terror, but add to this one of the most beautiful, layered chorus segments and a few industrial touches for what must be one of the most memorable individual songs I've heard all year, despite lyrical lines like 'wid a slit way up de butt' and 'dat is wot a rat shud get'. So unbelievably cool, it delivers me shivers every time I brave it.

Other standouts here include "Eukalyptustreet", a steadily climbing, 9+ minute piece which transforms from a tonal vocal poem to an urban saxophone solo that heralds in a series of disturbed, whispering patterns, only to erupt into choral glories and chugging metallic force. "Raudedauden" rips along with dense, thrashing force and soaring, ICS Vortex styled vocals, while "Stridsljod/Blackabilly" is a giddy Gothic/black crusher based around a strange murder mystery novel that Cornelius had written. "Waves Over Valhalla" continues the Viking prog saga the band thoroughly engaged on their previous two albums, and it's got more of the stunning vocal arrangements that make this record such a winner. "Vitets Vidd I Verdi" is another of the strange, driving pieces, escalating through bustling synthesizers and more of the beautiful femme vocals used in the chorus of "Tittentattenteksti", and "Hugferdi" follows a similar theme.

When you woke up today, did you feel a driving need to listen to something different? Well, Norrøn Livskunst certainly fulfills that desire, recorded in stunning studio polish with a number of songs I will not soon forget. If you fear the liberal implementation of diverse, yet refined elements into your black metal, a genre which Solefald is only distantly rooted, then it's highly likely you've never enjoyed a single record this band has ever recorded, and I doubt this will change your mind. On the other hand, fans of Ulver, Borknagar, Peccatum, Ihsahn and earlier Solefald should be quite thrilled to experience this, because it faithfully and fearlessly fords the fjords of expression like a cannon manning, crackpot admiral so stuffed with soma and regret that he has no choice but to sail to his own, beautiful suicide. Weird doesn't always have to be this good. But this time, it's more than good.