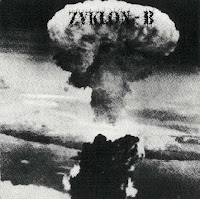 Zyklon-B must be one of the shortest lived collaborations in the history of the black metal elite, with its collective output limited to 4 tracks total, all of which appear on the 2004 re-release of the original Blood Must Be Shed EP, and all of which were issued elsewhere on a pair of limited splits. It's unfortunate, because, well, I rather enjoy what is happening here, but understandable given the band's other attentions at its time of conception. Samoth and Ihsahn were busy conquering the world with their prime project Emperor, drummer Frost with Satyricon, and Draug Aldrahn probably hoping for the same from his excellent Dødheimsgard.

Formed in 1995, and releasing this in the same year, there is a clear dissimilarity to other 'super groups' like Wongraven or Storm in that Zyklon-B express themselves not through the sidereal excursions into the folk/ambient climes, but through beastly and straightforward black metal savagery. This is 11 minutes of fast, loose and lethal extremity, more expedient than Dark Medieval Times, more puerile than In the Nightside Eclipse, and more focused than Kronet Til Kronge, yet startling in its efficiency and not lacking in the melodic department, you simply have to survive the initial velocity of its opening charge, the unbridled eruption that is "Mental Orgasm". Scintillating, slicing walls of guitars channeled across several standardized but excellent riffing patterns, breaking around :45 into a grinding velocity that is heralded by a simple voice sample. The finale of the track arrives like a nuclear cowboy tossing his hat into the oncoming fallout.

"Bloodsoil" is one better, a more atmospheric piece with an almost jazzy ambivalence created through the streaming tremolo notes and walls of majestic synthesizers, but it too shows its repulsive, bestial heart, performed at lightning pace for the first 1:30 of the song, before the drum fills shift the piece into a brief, warlike segue. "Warfare" is about the same length as the other two tracks combined, 5:30 of storming disgust that once again uses the choral synthesizers to create this rampant mystery above the monotonous but beatific razor-din of the guitars. At around 1:00, it collapses into a purely 'symphonic' black metal bridge, Draug Aldrahn's barking the best here on all the EP. The final track, if you've got the 2004 re-issue or the limited split with Mayhem, is "Total Warfare (Sea Serpent Remix)", which mixes "Warfare" with various industrial and hip hop beats to mixed effect. It's completely unnecessary, but as it's not a part of the original release, I can't really fault it.

I like Blood Must Be Shed quite a lot, and at times I bear a curiosity as to what a continuation of its exploits might have manifested, but at the same time, it's so narrow and harrowing that it just sort of stands on its own, so I can understand why the participants might not have wanted to do anything further. Samoth would of course return years later with a band known simply as Zyklon, but the similarities are limited, since he transforms that into more of a modern, molten black/death hybrid. The mix here is rugged, but fitting to the level of manic rage being churned out through Frost's drumming and Samoth's guitars, and it's quite 'fun' to hear these four men making music together, though never underhanded or humorous. Really, if you're a fan of almost any Norwegian black metal of the mid 90s, from the works of the constituents to Kvist, Burzum, Gorgoroth or Immortal, then this is very much worth owning.