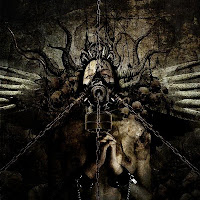 You wouldn't think of Serbia as a hotbed for metal acts quite yet, but in fact there are a hundred or so bands hailing from the area, one of whom I present to you here. Bane, not at all to be confused with the popular US hardcore band, performs a mix of black and death metal with strong production and an intense focus on the riffing over sheer vitriolic speed, their debut Chaos, Darkness & Emptiness a decent if familiar work that may indeed appeal to fans of numerous genres. The 'death metal' portion of the album manifests largely through some of the chugging riff patterns and about 50% of the vocals, which are splayed out in guttural excess, while the remainder consists of streaming, cutting chords and rampant snarling.

Bane certainly sounds like a great deal of other bands, in particular Norse bands like Emperor in collision with Swedish bands like Dark Funeral or Hypocrisy, but I'd say they cast a wide enough net that you don't feel the material is too derivative of any one school of fish. Perhaps the strongest point of this full-length debut is that the band pace themselves well, offering some variety through the track list that keeps the listener engaged, though not exactly glued. The "Awakening of the Evil Spirits" intro is a nice synthesized classical overture breached by the hammering of "The True Insomnia", a piece that quite evenly divides its time between the two constituent genres, while "Pandemonium" writhes along at a brisk, mid pace through which the thunder of the rhythms is glazed over in chorus shouts, double bass and brisk flights of increased speed. After this is an acoustic piece, "Lost Shadows", and then a fairly brutal onslaught called "Abhorrence".

No two songs sound quite the same, and each delivers at least 1-2 quality riffs, my personal favorites coming in the melodic swagger of "The Haunting Presence" or the callous, blasting abandon of "The Dawn No More Rises". There's a nice ambient interlude piece deeper in the album titled "Dysthymia" which further cements the band's ability to vary up their content that the witness remain allured, but I wouldn't say that this was necessarily a great record, if only because there aren't enough tracks that you'll want to revisit constantly. Fans of bigger budget Swedish or Norse melodic black metal might very well find this their cup of blood tea, because the mix itself is quite enormous, and the compositions are never boring, but they're not blazing any new trails through the conscience. So, what we're ultimately left with is a debut that shows the talent and reach of a batch of individuals (all of whom also perform in other acts), but does little to bore itself beyond the upper layers of memory.