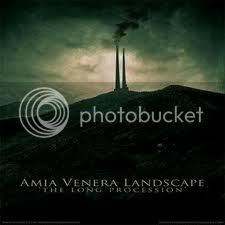 On paper, we've heard it all before: Scream/Clean dual vocal tandem, post hardcore, mathcore, metalcore, grind elements, and even post metal. In execution, The Long Procession is anything but an exercise in commonality, and not only draws the best out of its influences but displays an understanding of songwriting that is wholly uncommon for such a young band to debut with.
Dense and epic, Amia Venera Landscape have crafted such a dynamic (hinging on schizophrenic, but it never totally loses its bearings) record it can be a bit overwhelming. Piano gives way to jagged, angular guitar riffs that favor the atonal and thick. Switch-hit song structure fades easily into post-metal drone and then on to lightspeed picking. Vicious roars and screams ebb into triumphant, epic crooning over guitar crunch. Chiming, crystalline leads intertwine in the background of minor-key chugga chug antics. It's a complex, layered record that works on almost every level, even if a few elements tend to overstay their welcome.
Front and center here is the epic ten minute "Nicholas", a song that goes from Between the Buried and Me antics and halfway through switches into a interlude that wouldn't be out of place on a Sigur Ros album. Someone hits a switch, and everything comes back in: Heavy, slow, and evil, segue into another interlude, and the clean vocals bring us back into the thick with a crescendo that may have been ripped straight off an effort from Isis, all with a thread of commonality in their post-hardcore lead lines that gently guide this rabid monster through its inevitable life cycle. It's extended running time and the deftly arranged songwriting allow this monstrosity to breathe and grow on its own, and it all feels completely natural.
This is not a disjointed effort, it all flows remarkably well: For a debut album, the transitions here are admirably well done, and something the previously mentioned BTBAM seriously needs to take a look at.
"Empire" is as nasty as an album opener as someone could hope for, followed closely by two other corkers in "A New Aurora" and "My Hands Will Burn First", both of which showing heavy influence from Underoath, Alexisonfire, Starkweather, and any number of post-metal acts. The two "Glances" songs are probably the most initially pleasing tracks, especially the second since it contains more than ambience, but will be the first that wear a bit thin. It doesn't make them necessarily bad, but in comparison to the power of the rest of the album, they are the weak point.
The fourteen minute instrumental "Marasm" tends to drag in a few of the slower parts as well, but it's tendency to kick copious amounts of ass once it's hitting all its RPM's is a spectacle to behold.
Overall, this was a nice year-end surprise from this small band out of Italy. Powerful, dense, heavy as hell, creative, and executed with the deftness of a veteran band, Amia Venera Landscape deserves your eyes and ears to be on this monster of an album. Highly recommended.
Verdict: Epic Win [9.5/10]
http://www.myspace.com/amiaveneralandscape
Posted by Rock at 10:53 AM