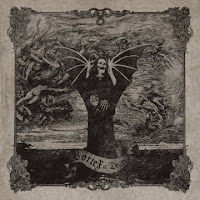 Hat is another of the recent crop of Norse black metal acts that I felt I could go either way on, but they've thankfully incorporated enough of an adventure into their sophomore Vortex of Death that I found myself drawn back to its contents a number of times, thanks to some savvy riffing, decrepit atmosphere and hints of experimentation which leave the safety and sanctity of their primary genre for a balanced, atmospheric leverage that simply functions. The material is often as primal and ambivalent as the next underground band, but enough thoughts are provoked through its composition that a close listen will reveal thoughtful passages of repressed synthesizers, whispered dialog/vocals and other tricks of the night.

However, it doesn't always shake the straightforward blast and weave of sobering familiarity, and there are moments of "Inhumanus Revelatio", "Overmenneske" or "The Flesh I Wear" which are hardly as compelling as others within the very same tracks. The guitars are thin and bristling, the drums barely noticed without their crashing vortices of support for the rasping and tearing of the vocals. On the whole, this level of sound actually suits the material quite well, because it creates a pattern of depth, like one being in front of the other, as if the band were playing at you from a series of hills, each piled with bones and cinders. The result is that some of the moodier, slower pieces like "The Path to Immortality", or the shifting "Invocating Death" with its stark and engrossing bridge sequence gone mad with rushing, blood stream riffs that channel eerie beauty, are well worth hearing even if the album is not entirely consistent.

I'll admit that I don't remember much about the band's debut The Demise of Mankind, but I can recall the band's name and logo, and with Vortex of Death, I'll be sure to keep them on my watch list. The delivery here is not stunning, nor staggering, but both convex and insular. Evil, and at its very best, mildly alien in composition, which is always sure to draw the ear deeper than your run of the mill black metal album about forests, snow and Satan. Not that Hat are writing about ponies, mind you, the band's name is Norwegian for hate, and their music is neither comfortable nor compromising, but they will not betray your attention span with needless, excess repetition or recycling all of the precise tropes that you might have grown tired of over the past 20 years they were hammered into you.