A Forest of Stars - The Opportunistic Thieves of Spring (2010) 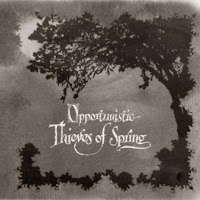 My reaction to this unique English band's 2008 debut The Corpse of Rebirth was mixed. Certainly a curious sound coming out of the lot, but not something I felt repeatedly drawn towards or distracted by. In fact, I've been sitting on its follow-up for months, as my thoughts adjusted from being bored to intrigued to enamored and ultimately the state of 'vaguely impressed', with some exceptions made for the relative bloat of numerous tracks, an inescapable ennui brought on solely by the indulgent space in which A Forest of Stars attempt to drown you. Yes, it's a band with some LONG songs, often 13-16 minutes in fact, some of which truly stretching into madness, like the soundtrack to an entire life, a life erring on the side of dementia.

The Opportunistic Thieves of Spring (great title) will take its time with you, indeed, but there are enough hypnotic elements that you won't always lack a reward for the wait. "Sorrow's Impetus" glazes its extensive core with somber string and flute sections between tortured, discordant walls of minimal guitar patterns. "Raven's Eye View" offers a landscape of both tranquil vistas and the upheaval of the earth beneath you, while "Summertide's Approach" is wrist glistening sadness that devolves into proggy organ tweaking and an amazing bridge that reminds me of Sarke's Vorunah (with Nocturno Culto doing vocals). "Thunder's Cannonade" opens with several minutes of violin before the instruments wails along eerily to the black rush, soon broken once more to the delight and horror of unconsciousness. I didn't really care for the male/female vocal companionship in the languid "Starfire's Memory", and yet I absolutely loved the 16+ minutes, psychedelic psychosis and robotic vocals used in the doomed "Delay's Progression", which is not only the highlight of this effort, but of their career.

Without becoming technical or even complex, A Forest of Stars incorporate a large number of ingredients into their music, but I feel like the male vocals of Mister Curse, etc, succeed more than any other . The guitars are very rarely writing interesting lines, they serve only to complement the beats and the more organic tones of the other strings, so prepare for a lot of repetitious where it's not always the most welcome, and as a result the album can feel rather pretentious. However, taken as a whole lozenge, there are indisputable good ideas and an oppressive strata of immersion that seem all too rare in this field of music. This record could represent the parting of the womb to reveal the gore of the newborn, or the final ashes of a human being being returned to earth, and many seconds of triumph and defeat within those two parameters. Your emotional response might be just as varied.