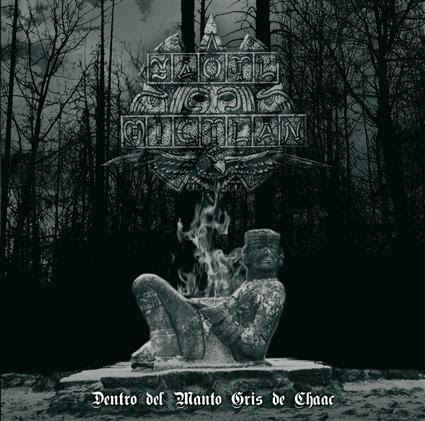 It is a refreshing turn of events when one comes across an act that attempts to embrace the elements of folk and pagan culture not gleaned from the pages of Nordic history and mythology. In many ways, the cultures of New World have as much to offer in reminding us of our roots, of the necessity for reflection, temperance and reverence of both the natural and spiritual words. A band such as Utah’s Yaotl Mictlan provides such an avenue of expression, manifesting their desires in their latest release Dentro Del Manto Gris de Chaac. Originally from Mexico, some of the member’s, specifically guitarist/vocalist Yaotl and drummer Tlatecatl, hail from the criminally overlooked but sadly disbanded black metal band Ibex Throne.

Yaotl Mictlan, through a very straight-forward, pragmatic black metal formula, incorporate many indigenous instruments into their sound, which also includes certain samples of jungle noises, thunderstorms and rain in an attempt to conjure up an homage to the roots of the indigenous Aztec and Mayan cultures of their homeland, weaving an entrancing spell around the listener, drawing them in through the tribal rhythms, inciting us into open defiance against the invading Spanish conquistadores, or even today’s bland, superficial homogenous Westernized cultures that often forsake and attempt to suppress the ideas of cultures and civilizations of past centuries and millennia. Stand-out tracks such as “Garra de Jaguar (Ocho Venado)”, “Chiuacoatl” and “Gemelos Heroes” use folkish instrumentation, with ritualized chanting and whispered passages in great affect with traditional, jagged, but ultimately straight-forward black metal riffing to create a concoction steeped in Aztecan defiance and hate. The perfect soundtrack to sacrificing the white-washed, hypocritical masses upon the apexes of our temples, cutting out the hearts of those that forsake nature and ancient tradition in favor of indulgence.

A refreshing change from a continued surge of more Norse-centric, or Slavic focused black metal groups; the warriors of Yaotl Mictlan have done well in creating something memorable and justifiably fierce with their work here. Certain improvements could be made, especially in regards to some of the more generic black metal approaches to their sound, but respect is due when it is earned and this album is definitely worthy of a listen if you carry an interest in the forgotten cultures that were long before men such Hernán Cortés arrived to butcher a civilization for the sake of gold and some guy nailed to a cross.