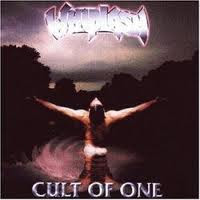 The 90s were surely the bane of the thrash band, as even titans of the genre decided in whatever drunken corporate stupidity that afflicted them to release nonsense like Load, Re-Load, Risk, and even Slaya's bouncy bed-shitting Diabolus in Musica. Sadly, these ill-advised and variably ill-met decisions were not alone, as the sub tiers of US thrash would also succumb to this menace, the menace of false assumptions that one must change and adapt in the wake of whatever trend is hammering the charts. I'm not saying change is always a bad thing, mind you, but the mentality seemed to trickle on down to even Whiplash, whose shoddy offering was the jump the shark mediocrity of Cult of One.

The band had been on a long hiatus after Insult to Injury, and their return was a pretty major letdown, though I was shocked by it at all. Glenn Hansen had left the band, and Tony Bono was very busy with his other band Into Another (a great band, worth hearing). There are several new members here, including bassist Jimmy Preziosa and guitarist Warren Conditi, and the new vocal slot was filled by Rob Gonzo, who is perhaps one of the most debilitating factors of this album. Gonzo has a vocal style very typical for the time, not terrible mind you, but full of the crass Phil Anselmo styled emotional 'huah', with a dash of Ozzy influence in places like the bridge of "Apostle of Truth". Now, as I said, he's not really that bad of his own accord. He hits all the notes, and he's not a critical fumble in several of the tracks, but on the whole he's just so much less interesting than Hansen or Portaro himself.

What's most frustrating about Cult of One is that there are actually a few genuinely decent riffs scattered among the quickly forgotten detritus, and it even seems to begin where Insult to Injury left off, with some clean guitars that herald the chord smack down of "Such is the Will". Even the grooves of the verse have some speedy fills, but the vocals sort of suck here, and in the end only the lead is any good. Then it goes into the awful groove metal track "No One's Idol" which sounds like an unwanted median of 90s Armored Saint and Black Label Society. I shit you not. "No Fear to Tread" is about half-thrash, and "1,000 Times" is another toss away groove/heavy metal song, like Down or Black Label Society or Alice in Chains. I'm sure the track "Heavenaut" had some meaning to someone in the band, and that's not to scoff at, but musically it's a power ballad cesspool which wouldn't have surprised me if the Creed guy started singing over it.

There are a few tracks, like "Apostle of Truth" or the strange and out of place melodic power metal instrumental "Lost World" which possess the tint of a good idea or two, and some fine playing from the band, but ultimately this record is the true low point of the band's career, ideas grouped together that simply do not work out as a whole. The production is nice, and the band were able to maintain themselves on another decent label, Massacre, but there is just so little here worth coming back to that one wonders if the band should have just stayed quiet until their real reunion album Thrashback. Cult of One is certainly not the worst album I've heard in the 90s from a promising 80s thrash band, but it's yet another testament to the notion that not all mutations of sound are beneficial, and as a result it was tossed immediately into the vortex of overlooked ideas and forgotten jibberish.