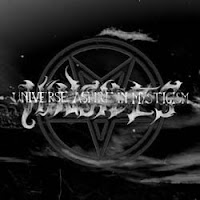 It becomes increasingly more difficult to appreciate an album like Universe Aspire in Mysticism in recent years, if only because it feels it has been written so many times in the past. You've really got to dive in between the notes and graphs to find something to clasp on to, but ultimately the Norse band is somewhat redeemed by its slower material. Hinsides have been around for a few years now, and this is their second full-length offering of straight forward black metal, with a pretty notable inspiration from Immortal or Bathory, perhaps a touch of Enslaved, a few interesting chord patterns shoved in among the legions of charging hessian troops that the band are constantly hammering out.

At first, I wasn't sure what to expect, for the bizarre 6:35 minute intro "Dark Matter Dawn" creates a disturbing ambiance through feedback and bizarre sounds that is anything but cohesive and eloquent. However, "666 to Nero" is a straight forward blasting black track which sounds like almost any random piece selected from an earlier Immortal album, or Marduk, or Mayhem, and though it's not at all bad, it just doesn't really catch on until the bridge breakdown with its whispered vocals. "Black Witchery Ritual" starts at a slower, majestic pace and only forces a few blasts into its compositions, for a greater overall effect, which feels like drifts of ash tainted snow alighting on some twisted sage of the occult. Other stronger tracks include "Within Infinite Mysteries" and "Moonlight Path to Darkness", though the latter does suffer from a few moments of less effective riffing among its 8+ length.

Tone-wise, I actually like the bass sound of Glaurung here, how it hovers just below the splintering sorrow of the guitar chords, Gravklad barking across the joint maneuvers with a pretty expectant rasp. The bass constantly feels like a mystery, even below the less exciting riffs, and certainly adds a dimension that slightly curbs the mediocrity of some of the writing. Once in a while, like the closer "Moonlight Paths to Darkness", you'll hear some synths added which also add another layer of depth, and one wonders if more of this might not have evoked a greater response in some of the other pieces, like "Dodenatt" or "The Passage", which, while adequate, are just not compelling. In the end, for a universe aspiring to mysticism, this album is not quite mystical enough. There is nothing inherently wrong with the style or the skill of the musicians, but it's unlikely to provoke repeated visits. These Norse know what they're doing, but it's been done to a fault.