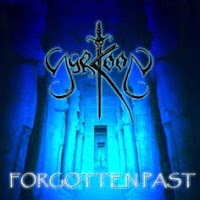 After their debut Oniric Transition met with only a very small success, the French band Yyrkoon decided to follow it with this self released demo/EP Forgotten Past, seeking out an even deeper and darker symphonic sound. The result is perhaps the least impressive of their works, but still features a few traits associated with the first album, namely the swerving bass performance and the mix of snarled and clean vocals, and decent leads. Compared to their recent output, this is a lot more focused on using keyboards as the primary element of composition, and often the guitars just chug along with a sluggish interest, the riffs never really standing out from the dense, haunted castle embellishments.

Of the three tracks here, the two longer pieces are the most worthy of attention. "Forgotten Past" and "Enclosed in a Dream" are both dark, symphonic, with the latter containing the better use of the guitars. Each is over seven minutes in length, longer even than the more bloated tracks on Oniric Transition, but they fortunately don't become tired, only underwhelming when compared to the band's earlier and later material. I'd almost say that they resemble the mid 90s efforts like Passage by Samael, but they're nowhere near as catchy and the actual drumming differs from Xytras and his machinery. "Schyzophrenic Carnage" is a more brutal and grooving track, but since it's re-recorded and far superior on the Occult Medicine in 2004, there's no reason to pay it mind here.

Forgotten Past is extremely rare, but last I checked, you could listen to "Forgotten Past" and "Enclosed in a Dream" on Youtube. Coming in the middle of the four year period between Oniric Transition and Dying Sun, it certainly doesn't incite much hope for the future of the band, but thankfully those are words I'll be eating. Unlike Oniric Transition, there's just no promise here, almost as if Yyrkoon gave up to trend and decided to delve into the symphonic black metal of the time, only with less black metal ingredients. The EP doesn't exactly suck, but unless you are hell bent on experiencing obscure, simplistic haunted castle style atmospheric death metal, with few guitar riffs to write home about, I'd advise you to start anywhere else in their catalog.