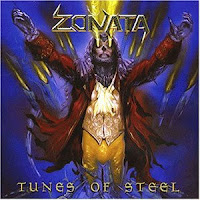 Sweden has certainly loosed the melodic lightning of many a power metal act in the past decade, but even the best or more successful of these (Hammerfall, Nocturnal Rites, Lost Horizon) draw fairly heavily upon influences south of the German border. That is certainly the double edged sword that dominates the debut of late 90s bloomers Zonata, Tunes of Steel. At its very best, the album sounds a lot like Gamma Ray or classic Helloween, given the surges of nasal vocal wailing that Johannes Nyberg constructs, but though the performances are all around competent, it somehow falls short of the impact crater left in the wake of a Walls of Jericho, Keeper of the Seven Keys or Somewhere Out In Space, and since it arrived at a point which its influences were faring so strongly, there simply wasn't enough room left for this niche act.

They did manage to score a deal through Century Media Records, alongside their countrymen Nocturnal Rites, but the album wasn't promoted here in the States whatsoever, so it was largely a product of the power metal boom at the turn of the century. Though it exhibits a slight flair for the dramatic and progressive ("Criticized" or the power ballad "Beyond the Rainbow"), its far more apt to nail your attention when it's shuffling through Scanner, Gamma Ray or Metalium styled material such as the blazing "Geronimo" or "Bring You Down to Hell", through which Nyberg channels a balance of Michael Kiske and Kai Hansen both. But even in this frenzied terrain, the band often throws out a forgettable blitz like "The Evil Shadow" or "Welcome to the World of Fun", with a lot of riffs happening, but a real failure of the vocals to form the notes necessary in an enduring power anthem.

I'll give the band some credit in that they're fast and efficient, enough so that even the worst tracks on the albums rarely hinge on boring. In fact, if you're in search of a blast of energy in the vein of State of Triumph, Hypertrace or Terminal Earth, then the field is rather narrow, and Zonata might just have your ticket. Unfortunately, this is just not enough to leave a lasting impression, musically or lyrically, and most tracks would require a lot of slicing and reconfiguring to escape their habitual prisons. This is arguably some of the heaviest material manifest from these particular Swedes, but with their maturity will come superior songwriting, so it's the last I'd recommend out of the three they released in their career. For screaming, Germanic power metal fanatics only, and even then you won't regret passing over it.