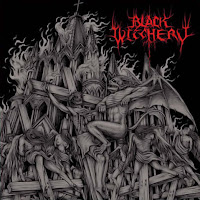 There are few collectives of Christ trampling individuals here in the States that can quite match the level of miserable power being manifest through the recordings of Black Witchery, the Florida band responsible for such sacrilege as 2005's Upheaval of Satanic Might. However, I'm afraid their level of caustic, narrow, unrelenting aggression does come at a cost here, as there are almost no dynamics here aside from those of planting your skull under their heathen boots and then crushing, crushing, crushing, their bloated, hostile weight seeping through your cranium and making paste of the soft, pinkish contents that may or may not be contained within.

Yes, Inferno of Sacred Destruction is predictable, a one trick pony if you will, but a nightmare steed nonetheless that peppers its bleak, "Intromancy" or "Sepulchral Witchcraft" interludes with carnal sewage the likes of "Holocaustic Church Devastation", "Antichrist Order of Holy Death", and "Kingdom Against Kingdom". No, this is not a bunch of guys you want to drink egg nog and sing Christmas carols with. Their godless tumult would not only provide an instant ticket to the space below purgatory, but a season's fucking pass to the Damned Soul Olympics. Incredibly oppressive, raw guitars bludgeon over noisy, warlike drums while Impurath's hate is poured free like a conflagration of concrete, and at best you're going to get a number like "Ascension of the Obscure Moon", the unforgiving 4 minute closer which sounds remarkably similar to the rest of the contents.

Sadly, while I can appreciate the band's charnel onslaught, the riffs here simply did nothing for me, bludgeoning along like the very primacy of chaos from which this genre once originated, but never once configuring into hooks that are worth a damn. Thus, you are left with only the bludgeoning atmosphere provoked through their mesh of instruments and torn throats, and I found myself drifting away after even a few minutes. The album's pretty short, only about 22 minutes, so it never really becomes boring, but it's difficult to pay it much thought when you are sure nothing titillating is hovering at the edge of perception. That said, I don't really have anything negative to say. If you appreciate black metal at its most barbaric and primitive, and seek nothing but the affectations of loathing and treachery that this band revel in, or the Osmose and Hells Headbangers imprints in general, then it's not exactly a waste of space.