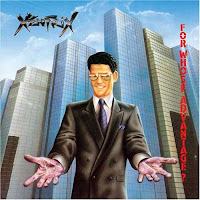 As cheesy as its anti-corporate implications might seem, I've always found the cover to Xentrix' sophomore album to be quite iconic, so it's only too fitting that the musical content of the album itself is the best the band has ever written. There's both an increase in overall riffing and structural quality here, not to mention a damp, punchy tone to the guitars which imbues them with this condensed, thrash gait that really gets on well with Chris Astley's vocals. There's also a clinical, technical advancement to the performances which is simply more interesting that what was found on Shattered Existence. Of course, there are still clear similarities to bands like Testament or Metallica, but it's obvious the band were starting to depart from such well tread waters into their own little niche, which I dare say even brings in the influence of more locally grown Euro thrash like Destruction.

It helps that the record begins with such an excellent song in "Questions", probably my personal favorite of the band's career, edging out "Balance of Power" from the debut. A nice, harsh chorus melody to the vocals, surging and devious riffs that spike in tiny, dire melodies. "For Whose Advantage?" is another great track, with a mellow bass intro and an almost melancholy sense of desperation to the open, simple riffs. Tracks like "The Human Condition" and "Black Embrace" maintain the power level of "Questions" with similar setups in the guitar, and though it might come as unexpected, the cover of Gillan's "Running White Face City Boy" is not so bad. There are a few tunes here which don't deliver quite the same level of thrills, namely "The Bitter End" or "Kept in the Dark", but in the end they're not far enough behind to really drag down the overall effort that much, and you can usually listen through For Whose Advantage? front to back and come out the richer.

I'm going to admit that England gets a bit of a by when it comes to the thrash metal genre, as their later 70s, early 80s heavy/speed metal was partially responsible for its creation, so the fact that there aren't a hell of a lot of releases of note to wag my dick at does not disappoint me. You have some pretty huge exceptions in a Sabbat, Pariah or Onslaught, but Xentrix is yet another name to bandy about, and For Whose Advantage? is probably the best album to start with. The debut is solid, undoubtedly, but it's not nearly as interesting as this, and the band had clearly begun to evolve into something greater. Unfortunately, this is also where the momentum halts, because the albums to come would not be this good. Kin does continue along in a similar fashion, but it's not as hard hitting, so creatively and riff for riff, this remains their peak.