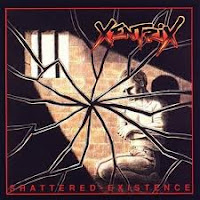 Though they were considered little more than average in their day, Xentrix were easily one of England's more consistent thrash metal acts. Their debut Shattered Existence might have fallen somewhat short of iconic, but to these eyes and ears, it was just another in a long line of examples that once made the Roadracer imprint of Roadrunner records so damned special in the 80s, before it was merged with the parent, its roster whittled into nothingness, out in the cold, and looking for handouts from other labels. You won't find much by way of innovative writing here, the band was very clearly influenced by US acts like Metallica, Testament and so forth, but what they lacked in originality they compensated for with structure and sound.

Even today, two decades past the fact, Shattered Existence still sounds potent, thick with banks of thrusting guitars that dance between semi-fast and mid-paced moshing tempos, with subtle hints of complexity that don't entirely manifest into what some might consider 'technical' thrash, ever mindful of the accepted verse/chorus patterns that were carried into metal from the pop and rock genres. Chris Astley had an aggressive vocal style with a little less sharpness and emotional dialog, than say, James Hetfield, but by the standards of the late 80s it was efficient and created a functional symbiosis with the guitars and solid rhythm section. "Balance of Power" is my clear favorite of the album, and the first track I've heard from it, a simplistic momentum not unlike "Seek and Destroy", but I also enjoy the faster "Back in the Real World", the vicious "Dark Enemy" and the Testament-like "Bad Blood and Reasons for Destruction".

Not every song is memorable, but there aren't any I'd really consider bad. The opener "No Compromise" only has one good riff (the first), and then the chorus sounds similar to the great opener "Questions" from their sophomore For Whose Advantage?, and "Position of Security" is also pretty weak, with "Heaven Cent" suffering from some lame, pinchy Dave Mustaine styled vocals in the verse, until Astley returns to his Hetfield/Billy howling. Otherwise, the album is engaging enough to spin on occasion, though I wouldn't target this as essential if you're tracking down thrash/speed metal gems from the time period. The full-length followup is a better solution, with a handful of more enduring tracks, though the style is very much the same. As far as British thrash metal outside of legends like Sabbat or Onslaught, Xentrix showed a lot more promise than an Arbitrater, Decimator or Deathwish, but their dearth of ideas might have dragged them below the radars of the multitude.