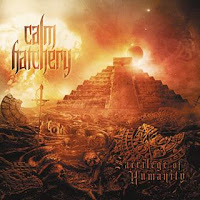 It was truly a pity that more people didn't catch on to this Polish band's 2006 debut El Alamein, for it was a superb offering of blunt and brutal death metal that certainly would have pleased fans of their better known countrymen Vader or Behemoth, or US staples like Cannibal Corpse, Morbid Angel, Hate Eternal, and Suffocation. In fact, I'd go so far as to claim it was one of the better death metal albums of that year, with its cautiously carved and implemented inertia compensating for any dearth of new ideas that the band were incorporating. Well, four years on and the band have proven they're no one shot in the dark, with another impressive offering that, while still not among the more original acts in the genre, shows enough skilled craftsmanship and dynamic range that the band should surely be vaulted into the ranks of Decapitated, Trauma, Lost Soul and others of their trade.

This sophomore is essentially 37 minutes of rich, tightly executed material through themes both earthen and universal, examining and lamenting and fallen majesty of ancient cultures and the unthinkable acts of warfare. The musicianship is expertly exhibited through the battering ram blasts loaded with interesting fills, solid rhythmic guitars that thrust forth at both hyper ("Messerschmitt", "We Are the Universe", "Those Who Were") and measured ("Shrine for the Chosen One", "The Blood of Stalingrad") tempos, and the titillating leads which thankfully fall short of mindless wanking. Throw Szczepan's vocals onto the writhing, regulatory mass and you've got one of the better approximations of post-Morbid Angel on the international landscape, and I for one have no problem with this whatsoever. Obviously, the longer tracks like "Sea of Truth", "Lost in the Sands" and "The Blood of Stalingrad" have slightly more gravity and atmosphere than the quickened bursts of "Mirror Giants" or "Those Who Were", but the balance of both is appreciated and paces the album extremely well.

It would be all too easy to sell Calm Hatchery down the river as yet another in a seemingly endless plethora of influence worshiping death metal mavens, but even a cursory examination of Sacrilege of Humanity reveals such an ass kicking experience that it shouldn't be missed. Akin to their Polish brethren, they're able to equip their bruising hostility with elements of melody, mysticism and proficiency that are both compelling and rare. Not a single song on this album sounds forced or effortless, even if a small handful of the riffs fall behind the rest in overall tone and quality. In fact, it's nearly comparable to its predecessor El Alamein, though where it makes up in complexity it lacks in the surprise of that debut. This is by far one of the better, straight modern death metal albums I've heard this year, falling in line with the latest efforts from Trauma and Severe Torture, and let's hope some effort is placed in its promotion, and that the band isn't ignored this time around.