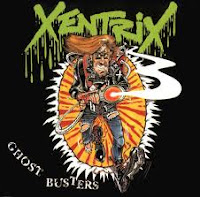 Metal music has always been ridden with the pestilence of failed attempts at irony or humor, and this very often manifests in some extreme metal act performing a cover of a pop song. Once in a great while, it might succeed, but in the case of this ill-advised cover of Ray Parker Jr.'s theme to the Ghostbusters film, it is an abject failure that should be incinerated at every available opportunity. Riding high off the minor buzz that their debut Shattered Existence inspired, Xentrix decided to bridge the gap to their sophomore full-length with an EP/single featuring this cover as its central point, and fuck does this stink.

I remember heading to the mall to pick this up, under the assumption that it was just an original song inspired by the films, and being stunned at how utterly stupid this was. Happy, dorky guitars translate the original instrumental into one of the most disposable renditions available, even if played accurately with decent backing vocals like the original. The problem is, it's not funny. You might giggle at the irony of the idea for about 5 seconds until you realize that, no, it's really not funny, and a waste of time, even if that's less than 3 minutes of time. But the real issue here, is that the other tracks don't make up for it. "Nobody's Perfect" is bass-driven garbage, with mediocre thrash riffs and middling vocals up until the chorus, which is not equivalent to even the worst tracks on Shattered Existence.

Thus, any value to the release falls solely on the shoulders of "Interrogate", which is again, a mediocre piece that would've only scraped the bottom of the band's first two albums. The vocals and riffing dynamics are easily superior to the other tracks here, and it picks up into acceptable levels of thrust, but it's too little and too late and there are simply better options available in the remainder of the band's catalog. In short, there is absolutely no reason to hunt this down. The three tracks have since been included with the 2007 Metal Mind re-issue of the band's debut, but otherwise I would not spend even a dime on adding this to my collection. A cute gimmick, perhaps, but cute wasn't going to cut it, and I'd accept even the dorkiest phoning in of ironic, unfunny retro thrashing over this plebeian attempt at a pop culture gag.