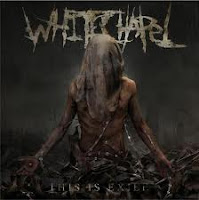 Transferring from their deal with Siege of Amida/Candlelight over to Metal Blade, the more secure home of fellow deathcore mavens Job for a Cowboy, Whitechapel returned to the millstone to churn out their sophomore This is Exile the year after their debut hit the shelves and ipods of cool kids everywhere, and its contents hit and bruised the pretty faces of many an anguished youth during the band's breakdown centric live performances. This time, no expense was spared, as the band commissioned some better artwork and had the album recorded and mastered in New England, the latter job handled by the infamous metalcore production guru Zeuss out in western Massachusetts.

Considering this, the result is pretty astonishingly similar to the debut album, with perhaps a larger flair for melodic death metal running in currents through the band's brickhouse chug off breakdowns. Some added technicality is to be expected, and thus the album is busier overall, what with the band keeping their three guitar approach to composition (that is really only felt in the leaden bottom end and full rhythm segments behind the breakaway melodies), but it still feels like a mix of the same mosh core and trendy melodic death, with vocals that once again conjure up a mix of Vader, Behemoth or Morbid Angel guttural aggression with the layered on snarls you expect from a lot of modern brutal death. The breakdowns are here, still, and very rarely any good, tending to leech away the bursts of the title track or "Exalt", the latter of which has some decent little lead licks and atmospheric touches that disappear into a wall of fist fucking djent fury.

One area in which the band have clearly improved is in the lyrics. No more will you find the sadistic sexual surgery of the debut. The band seem to have moved on to higher brow concepts like sacrilege and undead social rebellion. Granted, they can hardly be dubbed 'poetic' or even all that interesting, but it seems a little more fitting to the band's aural aesthetic. The mix here is brighter and bloodier than the debut, and perhaps more welcoming since the band have upped their melodic ante considerably. Ultimately, I feel like This is Exile is a slight step up from The Somatic Defilement. It's more thoughtful, but still pretty frustrating, with the best track being a 3 minute melodic chugging instrumental... ("Death Becomes Him") and almost everything else flipping its lid between forgettable thrusting rhythms, semi-tech showmanship and trendy beat downs. This is one dance partner you're not going to remember in the morning, regardless of what venereal ailment you've picked up.