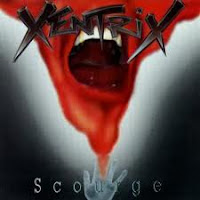 Four years after their departure from the Roadracer/Roadrunner brand, England's Xentrix would take yet another stab at the spotlight, though they'd be doing it without central component Chris Astley, and the sad, sad Scourge would be the result. Though I might be able to sympathize with the fact that the band have at least attempted to write a more captivating, aggressive album than its slothful precursor Kin, I'm afraid that this is not manifest through some wanton return to the band's solid roots in Shattered Existence or For Whose Advantage?, but a sorry stab at groove metal and even at one point, a rappish metal that will truly have you rolling in the aisles with your 'what the fuck' faces on.

I'm not saying that Scourge is devoid of thrash, because through all of this, Krisitian Havard's terse 1988-1990 riffing somehow manages to surface, and the rhythm section of Dennis Gasser and Paul MacKenzie is as punchy and potent as ever (in particular the bass on this album, which pops along unconditionally). The problem is that the songs suck, like some ridiculous disposal area for ideas that should have been left on the studio cutting room floor. A song like "Strength of Persuasion" begins with blistering, interesting melodies and then waylays them for incredibly boorish, big groove metal that even Godsmack might have passed on, while "13 Years" opens with a hostile ambiance and more forgettable grooves in between small spikes of the thrash we once loved. "Never Be" and "Creed" feature laughable, bouncy juggernaut grooves, even though new vocalist Simon Gordon, who does a decent job of remaining in Chris Astley's emotional, Bay Area style snarling territory, turns in a half-decent performance there.

But perhaps the biggest offender is "Caught You Living", a progressive groove metal track in which Gordon actually raps out the verse. Now, say what you will about rap and metal in combination, personally I think it's a solid idea that's never borne truly worthwhile fruit, I've even failed at it myself, but if you're going to go for it, go all out I say. In the case of this track, it's incredibly dorky sounding as Gordon attempts to blend the far too white vocal patterns with the screaming of the bridge, and then when the song actually stays consistent in its new rhythmic structures, it feels like an unwashed stain upon its hide. It's pretty pathetic, and combined with the album's other sour spots, like the airy but empty thrash/ballad "Breathe" that rides out the track list, it makes for what is by far the worst of Xentrix' full-length outputs, making even Kin seem acceptable by comparison. Just another victim of the 90s, and of themselves. Burn after listening.