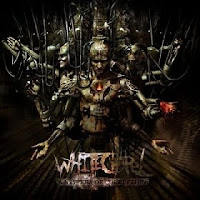 Contrary to how my feelings on most of its primary progenitors' works might cast a gloom upon the deathcore genre as a whole, I'm not internally opposed to the idea. The idea that breakdowns, youth mosh attitude and other key characteristics to hardcore or metalcore could be incorporated into death metal music is hardly a long shot. Death metal and its own parent genre thrash were loaded with such things already, just...better. Deathcore seems a fairly natural successor to metalcore and its elder sibling, crossover, but the fact stands that so few artists within its confines have written anything even remotely compelling. In fact, it's sadly telling that some of the best albums in this category (like Job for a Cowboy's surprising 2007 album Genesis) are merely those that bark as straight up the pure death metal tree as possible.

Whitechapel are not an entirely talentless bunch of guys, but the stamp of quality evades them once again with their third album, and second through Metal Blade: A New Era of Corruption. This is still the same chugging three guitar onslaught you heard on their prior releases, but the content itself seems to fall well between its predecessors in both quality and style, leaning towards the mosh slop of the debut with an added meat injection of math like, bouncing grooves ala Meshuggah or other djent acts. The vocals are still pretty bleak, at best sounding like Vader or mid-period Morbid Angel, but usually just a palette of scrappy tough guy deathcore with snarls interchanged like a street youth approximation of a Deicide or Carcass. The tones are rich and thick here like any modern extreme metal album, and no expense was spared, but the actual writing falls far behind the band's impetus to craft mere mosh anthems for disheveled youth who will forget all about it six months hence, and they don't temper them with what seems like any real steel whatsoever...

Take a track like "The Darkest Day of Man", which at its apex transforms into simplistic, thrash propulsion rhythms that reminisce to the groovier elements of Swedish melodic death aspirants (err, clones) like Black Dahlia Murder, but is otherwise a bunch of tightly wound, bouncing and slamming downtuned grooves that go nowhere musically. It seems like the process on this album is to shift through a number of brickhouse dynamics without ever really pondering the riffs that could transform them into something terrifying or effective. A New Era of Corruption feels like going through all too many motions. It's mechanical and precise, but if I didn't know any better I'd say it felt like the Tennessee band were bored with this. Whereas the predecessor had slight hints of inspiration, this is pretty much all blood and sweat channeled into meaty chug rhythms ("Reprogrammed to Hate", "Prayer of Mockery", "Murder Sermon") that seem to survive only on how many kids start dancing to them. There are riffs spotting this muted landscape, but they rarely catch the ear for more than a fleeting second, and are all too quickly evaporated into mindless slogging punishment.

If you woke up this morning and decided you'd just like to do barrel rolls and lawnmower kicks down the main boulevard of your city neighborhood, then Whitechapel provides an ample soundtrack to your quick fits of violence. But the memory of such a spree is guaranteed not to endure beyond the possible manslaughter charges. This might be the best produced of the band's albums, and the lyrics maintain the more hardcore, thoughtful essence of their sophomore rather than the perverse pleasures of the debut, and Phil Bozeman's vox might actually sound a little more gruff and brutalized, but none of these traits necessarily translates into quality music, and I'm yet again striving to find the appeal. You can almost randomly select a modern brutal death metal record at large and find more appealing, interesting content, and certainly the 'core side of the equation, which here manifests through the prevalence of palm muted breakdowns, is truly void of the ideas that made for successful stylistic marriages in the past.