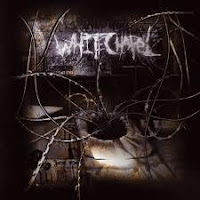 Whitechapel is one of the three major acts in the contemporary 'deathcore' genre here in the US, which, depending on which side of the 15 year old age barrier you fall, is either one of the most exciting or dreadful trends in all of extreme music. Not as fashionable as California's Carnifex, nor as evolutionary and intense as Arizona's Job for a Cowboy (on a good day), they seem to represent a more blue collar approach to the popular medium. Alas, this doesn't really translate into anything interesting musically, because the Knoxville brutes make most of the same mistakes as many of their less interesting peers, while adding nothing to the table that we weren't already sick of when metalcore turned from its waking, esoteric promise to insufferable pop inflected trash.

The Somatic Defilement seems to operate heavily around some of the most generic breakdowns the human mind can conceive. Breakdowns that were dated even as a seminal band like Earth Crisis or Hatebreed were taking off their training wheels. Add a pinch of math or djent metal influence (Meshuggah, specifically), slight passages of melodic death ala At the Gates, and dual grunt/snarl vocals that sound like your average overbearing tribute to early Carcass, Morbid Angel and Deicide, and let simmer for 32 minutes of dejected, which blows its load all too soon with almost all of its most potentially interesting tricks in the title track, which features several flighty death metal passages dispersed among numerous chug downs. "The Somatic Defilement" is like being teased with a death metal carrot down a shady alley only to be jumped by a pack of metalcore kids wearing huge pants and wallet chains.

This is not the only track that throws away its better seconds to a wasteland of mediocre mosh chugging. "Prostatic Fluid Asphyxiation" cycles between a decent opening volley of technical, clinical death spasms to some Meshuggah-like riffing, and then closes with an awful, hack palm mute sequence. "Fairy Fay" gives you about 10 seconds of something brisk before it too segues into the gutter, though there's a nice atmosphere as the lyrics bounce over the mutes into the bridge sequence. "Alone in the Morgue" teases us once more with its intense double bass driven old school death metal riff, sort of a mesh of Suffocation and Pestilence, but then erupts with some choppy, uninspiring riffs and guitar squeals before...you guessed it, another flatulent break down heavy on the palm muting, which completely strangles the momentum.

It's pretty unfortunate, because you can tell if these guys could stop fucking around and further some of their better ideas, they'd manifest into at least an average brutal/tech death metal outfit. Granted, that in itself is not for everyone, but personally I'd find it more compelling than what often seems a ceaseless tirade forged to sate the lowest common denominator of metal and hardcore fans; the mosh tyrant who couldn't give two shits about music, just a free chance to beat on people without spending a night in the slammer. Whitechapel do pen some pretty sadistic lyrics about molestation, murder and sexual malpractice, so in this way they're not a far cry from your typical gore or rape fantasy death metal element, with a slightly more psychotic spin, but the music doesn't even come close to building to a climax before it constantly lets you down with its shallow, vapid grooving and 'tough' sounding death/core vocals.