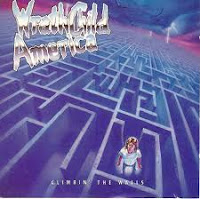 Not a hell of a lot of metal bands got to sign with huge labels like Atlantic in the 80s, and surely it was a testament (pun intended) to the trajectory of your career to count yourself among them. Or was it? Well, in the case of Maryland's Wrathchild America, who added the national suffix so they wouldn't dare be confused with a crappy UK band, it certainly seemed like they were going to be huge. Back in the close of that great decade, this was one of those bands that even your normal high school friends had heard about, you know, the cliquey types who liked Metallica, Ozzy, Megadeth and Anthrax but couldn't be bothered to ever delve further into the underground or even consider themselves 'metal heads' publicly for fear of losing job prospects or not getting laid by the good girls.

Yes, Wrathchild America had a lot going for them, but I'm not it had truly manifest in the debut Climbin' the Walls, with its iconic hesher in a maze cover artwork. Though the band would later develop into a more interesting hybrid of progressive thrash with a few jazz aesthetics, this is more like a mixture of Metallica's 1984-86 period with some traditional British heavy metal, not terribly unlike another hopeful band, Powermad. You've got some decent enough songs here like "Climbin' the Walls" itself which has a few decent, ripping guitar riffs and stupid but fun lyrics; the driving, melodic "Day of the Thunder"; the goofy but endearing vampire epic "London After Midnight"; or "Silent Darkness (Smothered Life)", a hymn to being buried alive with a nice melodic guitar line in the chorus. But then you've got garbage like the bluesy hard rock & roll of "No Deposit, No Return" which might have fit better with their UK counterpart, or "Candy from a Madman", which is hard not to laugh at despite an acceptable riff or two.

Then there's the cover of Pink Floyd's "Time", which you might not expect on an album like this, and well, it's "Time". While a band like Voivod would manage to convert an experience like "Astronomy Domine" into something relevant and even poignant on the mesmeric Nothingface this very same year, it just doesn't seem that it belongs with Wrathchild America. Granted, it's not the worst cover out there, but it's not doing Climbin' the Walls any favors. Otherwise, this is just not all that great of an effort. Catchy enough perhaps to get a few people to notice, with decent guitars and drumming. The production was sufficient enough to match label mates like the comparable Savatage, but in the end, this album would be greatly outclassed by its follow up, and I very rarely find any compulsion to go back and listen aside from maybe two songs.