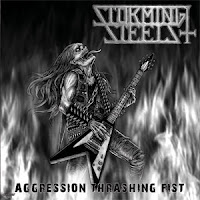 Though my blood curdles and mood darkens whenever I see the word 'thrash' being used on a song or album title on almost any thrash metal album released post-1990, I have to admit that the Aggression Thrashing Fist may just be one of the best album titles I've ever heard. It may simply be a byproduct of bad Southeast Asian English, but it really sticks, especially with the flying v-wielding skeleton rocking out in the flames of the cover art. You do not hear a lot of thrash metal coming from Malaysia, and Storming Steels temper their choppy and busy guitar bustling with venomous, blackened vocals (some might consider this black/thrash, though the riffs never enter that domain).

And the riffs here are really my major gripe with Aggression Thrashing Fist, for so many of them feel so predictable, patterns of chords that simply don't cut it anymore. This is not the rule, of course, and Storming Steels at times do evoke some blasphemous evil thrashing, but for example, take the riff at 2:10 in the opener "Pounding Merciless Evil". A little too redundant, and there are far better tracks here, but you'll start to get this feeling a number of times across the album. The band is at their best on tracks like "Eternal Forbidden Sins", "Hellwitched Possessed" and "Onslaught Thrash Outrage", where the riffs don't match up 100% with others you've listened to in the past. I will also mention that while Deathrash Blasphemies has a cool handle and charming delivery with his blacker vocals, he does often go a little overboard with the howling vocals, to the extent that it feels a little more like a mockery of the musical genre than an earnest attempt. I realize bands like Slayer used to do this all the time, but Araya had a more piercing slice to his screams that fit the music well.

Storming Steels is a band with their heart in the right place, and I like the crispened black thrash style they portray, with a mix of Venom, Razor and Piledriver influence. But some of the lyrics and vocals feel tacky, and there aren't a lot of winning riffs. However, if you're into the idea of a crude thrash sound with some bite to it and melodies, from Malaysia of all places, then this is one of the few options you can turn towards. Unlike other, tongue in cheek Asian speed/thrash bands like Metalucifer or Abigail, this one just doesn't always have the riffs to back up the entertainment.