The Wounded Kings - The Shadow Over Atlantis (2010) 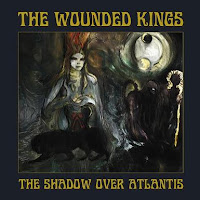 From its titillating, classic cover aura to the doomed conceptual saga exposed through its lyrical musings, The Shadow Over Atlantis is a solid sophomore offering which has helped fill in the recent rent in the fabric of quality doom metal of late. This stuff has always oozed, no, trickled through from the nexus of oblivion in small quantities, in part because most 'doom' metal bands are simply hacks who believe playing dull, uninspiring chord selections at drudging paces with aggressive vocals somehow fit the bill. The Wounded Kings could not be further from their bland contemporaries, for this English band reach right back to the source of the medium, a diminishing lifewell from which only slight strands of hope can escape, much less thrive.

The Shadow Over Atlantis is not entirely ignorant of its more modern suburbia, that is to say they have a penchant for slight atmospheric melody that one might hear in many modern atmospheric/ambient black or doom metal bands, but the chords and vocals themselves fall somewhere in between Candlemass and St. Vitus, or Black Sabbath and Skepticism, and their willingness to branch off into ambient segues of dreary, minimal piano and the sheen of ages to transcend the limits of the pure rock foundation. My tongue is running circles here as it transmits to the keyboard, but what I'm really trying to tell you is that The Wounded Kings are one of those great and rare doom metal acts whom you should listen to immediately if you have ever partaken in the genre with anything bordering personal rapture.

The 10+ minutes of "The Swirling Mist" represent the perfect descent into the submerged myth-history of the fabled, titular metropolis, as huge Sabbath-drawn blues crank out the grinding, lazy rhythms, and feedback grooves off into the depths, circling the central decline like a kraken in heat. The notes turn to crushing chords, and then the vocals...oh, the vocals. Imagine if Messiah Marcolin (of Candlemass) was a plague victim, but his corpse remained animated, and could be found deep in its cups at the local low rent drinking hole, crooning from the corner in the most deadened parody of its life songs, bereft of any pompous operatic excess. Melodic, depressing guitar melodies continue to emerge like tentacles from the surrounding waters, and the track becomes even more brilliant after the 7 minute mark, when it transforms from a ringing, tonal organ to more winding, sparse pianos to another muddied blues burn.

Akkadian fathers, buried with their sons
Fallen city, sunken lands
Beyond the void, beneath the sands
Buried city, Atlantis stands

From this, the "Baptism of Atlantis" rises, like a nautilus breaking the brine, thick chords roiling in a shifting morass of bloodied detritus, while another of the atmospheric guitars promises a bitter sun that you shall never rise again to see. Lament! This track, too, will fade into a sequence of sampled waves and dark organs worthy of Nemo, and then some twining melodies that cling to your lost soul like strands of hungry seaweed. "Into the Ocean's Abyss" is a brief, collapsing piano interlude which only compounds the bleak atmosphere of the album, just how much darker can this fucking get? The answer lies in "The Sons of Belial", another 8 minute crawl across the perils of hubris, replete with sparse and super powerful chords that suck the listener's life out like a vampiric squid, seducing you with the black inks and oils of its demesne. "Deathless Echo" is another brief segment, under 3 minutes, with lots of submerged atmosphere, slowly plodding drumbeat and sweltering abysmal organs, and it serves to herald the final, 10 minute opus "Invocation of the Ancients", which opens in lavish choirs of the damned and then haunting doom riffs that escalate into crushing force as you conjure forth the lost from their slumber at the oceans floor, all mysteries revealed and history repeating itself as black clouds roll forth over you and yours.

The Shadow Over Atlantis is shockingly good, you've simply got to commit yourself to its subtleties and imagination for the 40+ minutes to appreciate it. There is no musical complexity, and none required; just the raw and beautiful expression that has always graced the very best of the doom metal genre. Though the four flagship tracks are 8-10 minutes long, you never feel bored out of your skull when listening, and the interludes are striking and well placed to offer no-less-depressing segues from the crushing. It may not be 100% perfect in execution (the lyrics are adequate and bleak, if occasionally obvious and underwhelming), but this is perhaps the best doom effort I've heard in a very long time, and easily the one to beat in 2010.

The perfect soundtrack for grinding out a few levels in a crypt on this old school U&O mod I play on.