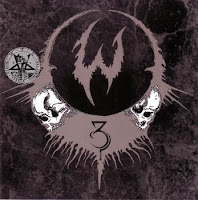 Wolfsmond is a collaboration between several members of German peers like the once controversial Absurd and the excellent band Eternity, the latter of which released one of the best black metal albums ever from that country in 2004's ...and the Gruesome Returns with Every Night. Obviously, it's the third album from this project, and the first since 2005's Tollwut. Wolfsmond perform a very standard black metal sound, but often amplifying its charms with segments of increased atmosphere, and doom-like chanting vocals. The band works very best when they are exploring their slower side, and the production here on III is among the richest I've heard yet out of the German scene, with a great guitar tone that should satisfy both the raw adherent and the fan of 'classier' black metal artist which knows how to manipulate a studio to create depth to their recording.

Their namesake track, "Wolfsmond", inaugurates the album with a pretty straightforward, melodic riff that surges into a simpler, warlike rhythm below the harsh bark (in German) of Managarm. The bridge takes a turn for the slower, with some passable leads weaving through prior to a slight escalation of hostility before returning to a trudging gait. "Ein Abgrund" is slower, but memorable, with a glorious rhythm that sounds like a panned shot of some ancient architecture on black and white film. Here lie the cleaner, deep male vocals which work strikingly well alongside the mystic rhythm, though I actually feel the song lost a little of its compulsion when it picked up speed near the final moments. "Verlockung" locks into a pretty standard, charging mid-paced riff, repetitive until the band once more enters a slower pace with a decent riff before the 2:00 point. "Ergraut" is a tranquil if forgettable acoustic piece with cleaner vocals and more of the band's choral male backups, and "Dort unten" is yet another slow piece which functions perfectly at a crawl, but then erupts into another, less interesting fast rhythm near its closing.

The latter half of the album picks up somewhat in the quality deparment, led by the granite flow of "Trübschimmer", with some eerie, cascading riffs that rank among the best of the entire effort. "Fressfeind" continues, with another slow and jerky rhythm sure to catch your attention as it grinds at you like slaves forever turning a great wheel, doomed atmosphere which crashes like a wave of bloodshed and dour warfare. "Entmenschlict" is a faster piece, and once again suffers from a little of the dull saminess earlier on the album, though I continue to enjoy the vocals even here. "Nachtangst" is worthwhile, though, weaving back and forth from a similar speed to a tortured, slow bridge that floors you with its sullen power and majestic change-up.

III is certainly the best sounding of the Wolfsmond albums to date, with exactly the powerful guitar tone I like to hear on a black metal recording. The vocals are very well done, with a good rolling, native clucking tongue to empower the punctuation of lyrical lines, and the rhythm section is balanced perfectly in the mix. About the only flaw I found is the often dull repetition of less worthy riffs, but by no means does this make the album bad. It's a solid slab of German black metal, easily recommended to a fan of the members' other bands (Absurd, Eternity, Darkmoon Warrior) or bands like Dark Fury, though it doesn't stand out very far from the swollen scene over there.