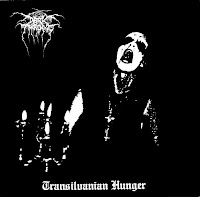 As if to infer some grim parody of the legendary KISS solo albums, the cover to Darkthrone's fourth album (and second pure masterpiece) features Fenriz on the cover, in beautiful newsprint tones with candelabra, inverted cross, corpse paint, and the perfectly placed corner logo and gothic album title font. Zephyrous and Nocturno Culto had their 15 minutes in the spotli...dark, and so now should the drummer. Surely, of their entire discography, this is the most iconic of the album art, and possibly the most memorable black metal cover of all time, even if it's not quite the best. It's the type of image that screams 'what more needs be said', and in that way, it is COMPLETELY loyal to the music of this album, a minimal masterpiece which contains hypnotic wave after wave of blissful torture, blood thirst and sorrow.

By this point the band was down to just two members, those same two that we would come to know as important personalities in the black metal scene due to their insights and tasteful endeavors through side projects. It can be argued that Darkthrone are the 'truest' of the original Norwegian black metal sect, due largely to the lack of narcissistic tendencies, and the adherence to isolation and obscurity which the musical message implies. Show me the last video this band made where the member were being lavished by goth models in leather? The cover images from 1992-1994 are about as self-centered as the band would ever get. And aside from a few rare live performances in their old days (as a death metal band), the band made the decision rather early that they would not be a touring act, not even at off-gigs in their own backyards. Though they've probably gotten a solid stash from their recorded works and tightly knit merchandising, the lack of live shows has probably put a severe dent in their earnings. But they don't care. And it is this 'nemesis of the music industry' business which I have always found refreshing in the world of superficial, idol worship that has extended its plastic fingers even into the black metal realm. Thus, I am proud to say my own obvious fanaticism for this band's work is based not only on their astounding ability to craft mood and rhythm, but on a healthy respect for the individuals involved. I can't say the same for a lot of bands...

Where Under a Funeral Moon was a slight shift from the sounds of A Blaze in the Northern Sky, this album is an even wider gyration away from its source. The lyrics here are almost entirely in Norwegian, with the exception of the title track and one other, a practice they used only on one previous song ("Inn I De Dype Skogers Favn"). The guitar tones are much cleaner, now that Fenriz had taken over all the instruments. You saw that correctly: Fenriz writes the music, Fenriz plays the drums, Fenriz plays the guitar, and Fenriz plays the bass here. Culto is on vocals. So you have what is essentially the 'birth' of the one man bedroom black metal act, even if they are cheating with two. At any rate, the guitars no longer maintain that same level of harsh fuzz as the past two albums, and while some might see that as a crippling mutation, it actually works in favor of the compositions, which are bleak and barren landscapes that one must penetrate before one can walk in step with its many glories.

As the melodic force of the title resonates immediately over the rather lazy tint of the drumming, you become quickly attuned to the fact that this is not the same Darkthrone of the year before. Here the guitars paint a palette of fallen majesty, of an archaic history that still stalk at the edge of European folklore and perceptions. The lyrics are rather blunt and obvious, and yet it's still one of the better vampire black metal tunes of the 90s, almost making Ancient and Cradle of Filth irrelevant for their flashier tributes to the subject matter. "Over Fjell Og Gjennom Torner (Over Mountains and Through Thorns)" is brief at under 2:30, but nevertheless a beautiful blast of icy northern stream water with scintillating, beautiful notes in the bridge that crash and echo against the stone walls of a mountainous atmosphere, in tribute to the band's native land. If you could bottle this track, I would gladly purchase it over Poland Spring or any other spring water I could buy around here.

"Skald Av Satans Sol (Poet of Satan's Sun)" is a more brutal onslaught of savage riffing, like a call to warfare, each riff a razor drawing blood across the scenery and a steady pounding beat that simply does not cease, ever, until the end. Distorted, bombing basslines thunder beneath, while the chord changes glisten off the fresh viscera of organs strewn about the battlefield, the band yet again proving the power of their simplistic compositions. Rather than break for a different tempo, "Slottet I Det Fjerne (Castle in the Distance)" rages forward, and the bridge rhythm truly does capture the image of its title, in particular if you can imagine the sun descending, shadows beginning to dance across the stones of its foundation. This is dense, forceful and atmospheric material, aped by countless artists and yet eerily still perfect here at the source. By the arrival of "Graven Tåkeheimens Saler (Tombs in the Misty Halls)", any sane person would probably feel redundant at the familiar drum eruption and the simple replacement of the chords, but one might argue that Darkthrone isn't FOR the 'sane' person, and this song is as perfect an expression as any other on the album, with colossal, crashing chords that sweep across the neck like a scythe.

"I En Hall Med Flesk Og Mjød (In a Hall With Meat and Mead)" continues, you guess it, at the same passionate pace, another charge of subtleties expressed entirely through the gleaming, beautiful chords, though this one features a crushing bridge before the 1:00 mark in which the band recalls the heavy Hellhammer/Celtic Frost style they polished on some of their previous effects. Monolithic and foreboding, one can feel the tension and horror of a lodge full of Northmen, taking what could be their final supper before being claimed by a murderous grendel. The riff before 3:00 is also a suitably awesome variation, with the hypersonic bass line slugging below its sharp edge. "As Flittermice as Satan's Spys" is the only track aside from "Transilvanian Hunger" to have English lyrics here, and it's another fast, cutting piece with guitars that swell in overture to the fallen angels of hell, represented by the tiny, winged ugly rodents our civilization often fears in the night. "En Ås I Dype Skogen" is a longing, desperate climax to the album, with riffs that feel like arms outstretched to touch the warmth of a faded sun, repeating like a ritual of futility against the onset of wintery death, with a majestic, haunting bridge rhythm.

A valid criticism often leveled against this album is its unwillingness to shift up its pace, and I could see how that might affect some listeners. In fact, were the riffs and atmosphere on this album not as good as they are, I myself might see this as a negative trait. However, the material composed for Transilvanian Hunger is so bloody good that it becomes a roller coaster I just don't want to get off...even if that means I race up and down the same skeletal tracks for nearly 40 minutes. There is a such a sense of unity and semblance among structure of the songs that I could imagine the following conversation take place:

NC: I love the riff you just recorded, but what if you were to shift to these frets here, and then ascend to that note there...
F: That's great! But I've already recorded the other sequence...

NC: Who cares? Just play the same drumbeat and write some different lyrics.
F: But...but...people might get kind of tired of...

Transilvanian Hunger is compulsive and addictive, like taking heroin shots while you snort lighter fluid. Sooner or later you are bound to catch fire, and sooner or later you are bound to fall for this album's monstrous level of charisma, despite the bland consistency of its surface to air missile drumming and ceaseless barrage of riffs which belong to the upper atmosphere by day, descending to the twilight world like a cloud of demons to settle upon the necks of the innocent and suckle their vitae. I can't say that i feel any less strongly about it than when I first picked it up, it is simply one of those eternal sensations which my imagination fondly drifts about with both cold nostalgia and aural satisfaction. The band's disconnect from all worthless trends continued here, another fist in the eye of the Creator and the scenester horseshit which was already beginning to poison the black metal scene of its day.

I suppose this is another of the band's 'love it or hate it' albums, but I place myself at the extreme edge of the left column, beating my little angel wings and firing arrows at passersby as I tune them into its grim and foreboding luxuries. Transilvanian Hunger might be perfect in a different way than A Blaze in the Northern Sky was, but it's still perfect, and you can take that to the blood bank and cash it.

Highlights: no Van Helsings in sight, kill at will and bleed to feed.