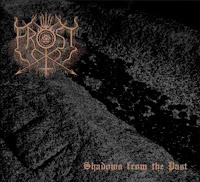 If this is The True Frost, then who is the fake Frost? The other German Frost? Or perhaps the UK Frost with the guy from Anaal Nathrakh? Perhaps it's not that important, because this Frost is a band which has been kicking about the grim enclosures of Deutschland since 1994, very early on in the wave of original black metal from that nation. Shadows From the Past is their 4th full length effort, arriving a full 5 years after the predecessor ...In Eternal Strife, and it functions with a simple and sadistic sound that rarely, if ever, strays from the standard definition of the black metal genre. Grim vocals, blast beats, and charging chords which are generally splayed out in a predictable fashion. To some, this will seem like nothing more than home, but I found that few of the tracks had much to offer beyond the expected. I would also note that some of the material here is re-recorded from prior offerings, but made consistent with the newer tracks here.

"Fluch" is a blastoff following a standard set of chords, becoming bright with lurid blood only when the melody saunters forth from the stark atmosphere at around 1:30, coincidentally the only part of the track that felt elevated from its environment. "Black Sun Rising" is a mid paced track with some rock rhythms that recall the influences of Hellhammer, Mayhem, and Bathory, but again nothing really interesting shows up. "Behind the Black Mirror" is a step in the right direction, with a wavy, punch packing riff stream that howls at you from the vortices of the band's nightmares. The messy, micro leads wail and squeal off into the warlike charging rhythm, and the track breaks later into some decent breakdowns. "From the Fields of Fire" centers on an eerie, bleak melody that scorches over the pumping bass and tinny blast beat, and "Wutsonne" is a slower, powerful piece which rocks hard ala Darkthrone, but with much less of the cold and raw atmosphere which accompany one of their albums. Of the remaining tracks, perhaps it is "Night of Purification" which I liked most, a barbaric blasting track with further use of the band's scathing, if simple, cruel and melodic force, and a nice break after 2:00 with a Slayer-like, "Angel of Death" edge to it.

The True Frost are certainly no novices to this flock, nor are there really many negative traits to the music aside from the fact that in a sea of so many similar artists. If you can appreciate one spiteful, cold black metal band that plays in the most traditional of styles, you can probably appreciate the next, and thus The True Frost might hold a key to those who seek nothing beyond this. I could certainly envision this if I were driving a beatup pickup truck into the frozen woodlands with thoughts of sacrilege and murder on my mind, just as I could a great many of the mid-ranking German black metal artists. This is neither good nor bad, it simply exists, performed with the conviction and horror you would expect from a seasoned band.

Highlights: From the Fields of Fire, Night of Purification