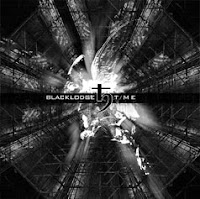 Ah, the French. I swear to you, they plan this shit out. They work in conjunction. If it's not Deathspell Omega or Peste Noire blowing your mind one month, you've got a Reverence or Blacklodge crawling out of the woodwork to remind you why theirs is one of the most interesting musical scenes on the face of the Earth, consistently spawning works that disassemble and reassemble familiar components into a strange and wonderful new whole. Reverse metal engineering, you could call it, and France is the current capital of this field. Blacklodge may be familiar to you, if you've had the pleasure of listening to their previous albums, Login:Satan, and the auspicious excellence of SolarKult, and like countrymen Reverence, they stand at the forefront of French industrial black metal, and perhaps the forefront of ALL European industrial black metal, since there are few such bands worth their weight in clockwork and urban waaste.

Blacklodge certainly pull their own weight, and this newest album, T/ME, is available as a package with the latest from Abigor, Time Is the Sulphur in the Veins of the Saint... Both bands decided to base a 'mutual', conceptual album aboug an Albert Einstein theme, and the Blacklodge 'side' is by far the denser, if not so sporadic and ever-shifting as the Austrians' own effort. No, T/ME functions on numerous, cerebral levels, but it's hard hitting like a titanium hammer to the midriff. Industrial rhythms and sounds provide a gargantuan landscape in which the guitar rhythms churn, noisy and frontal to the mix so that they feel like an improv jam at a factory. While Abigor's segment consisted of 2 lengthy tracks totaling almost 40 minutes, Blacklodge instead offer 5 more traditional length compositions, though the music itself is anything but...

"Lambda [or the last of the Gods; being the secret of SataN]" is the mouthful that opens this burned out shell of dystopic disconnect, awash in the sounds of bubbling murk, machinery, and descending ambient guitars that welcome the rotors of chugging to the narration of Saint Vincent before he put the ghastly, venomous sneer into his vocals. I was a little less taken with "Vector g [Gravity XVI]", which opens with a meaty chugging ala Red Harvest, but despite the many twists and turns it takes, I didn't really find any of this catchy. "Sulphuric Acedia" reminds a lot of Aborym, with razor thin guitar fuzz that slices over the pumping techno beats, and it continues to break into little guitar segues and drum programming that feels a bit too typical of most weak industrial/electro bands. On the other hand, "Saturn" is fairly interesting, a blitz of cyberspace into the reality of your head, battering blastbeats beneath a thrashing guitar rhythm, highly sporadic and chaotic. The final "...Stupefying [Suicide Tutorials pt 11]" almost compensates for the relative weakness (see what I did there? haw haw) of several other tracks: nearly 9 minutes that run from ambient/glitch to a turbulent, gothic morass of information and the rasping lyrics of a vile tongue, later fading into a strange unreality in which you feel you could shut your eyes and feel yourfelt floating against a backdrop of data blocks.

T/ME is captivating enough that fans of strange industrial/black metal, EBM, or gothic/electro could give it a go, but be prepared that the band is long ideas and short on really memorable writing, with the exception of the first and last track which are quite immersive. "Saturn" is also pretty exciting, though I could have asked for better riffs. Blacklodge specialize here in disjointed rhythms, technoid Satanism, and layers of atmosphere, but if you are new to the band, I would advise you start with SolarKult, the second album, which is a lot better. As a companion to Abigor's latest, it does function, if only because each of the bands takes a unique spin on their style and thus, stands out with some degree of success. I did prefer the Abigor material to this, the quality is simply more consistent, but if you the thoughts of machinery and chaos get you wet, you may want to at least give this a visit.

Highlights: Lambda [or the last of the Gods; being the secret of SataN], ...Stupefying [Suicide Tutorials pt 11]